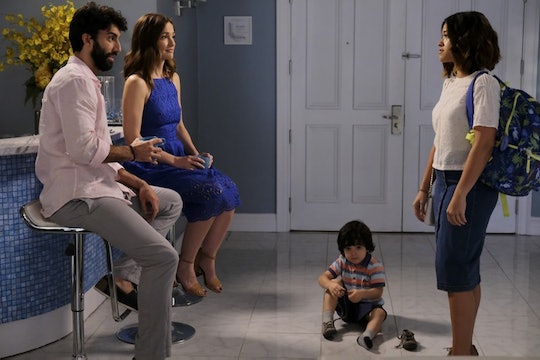 Abbey Remains A Mystery On 'Jane The Virgin'

The three-year time jump on Jane the Virgin brought in some new characters, including a new girlfriend for Rafael. Abbey, the owner of a greeting card company, has been scarce on the show thus far and the narrator has been hinting there's a reason for that. So can Abbey be trusted on Jane the Virgin? Honestly, probably not.

When it comes to new characters on Jane the Virgin it's always best to assume they're up to something nefarious until they're proven innocent. For example, when Jane's cousin just showed up out of the blue earlier this season, fans were right not to trust her, though she turned out not to be all that bad. Speaking of which, whatever happened to her?

Anyway, Abbey seems nice, but again fans haven't seen much of her yet to be able to tell if that's genuine or not. Plus, since Abbey's been introduced, Scott's dead body was found and one has to wonder if she had anything to do with it. Also, she and Rafael are already at the "I love you" stage of their relationship and yet she's always M.I.A. If their relationship is so serious why is Abbey so scarce on the show? What's she doing when she's not around? Killing people?

It also doesn't help that the show has tricked us before with a new character. Remember Susana? Rose's ability to change her face to become anyone has left many fans skeptical about Abbey, because really she could be anyone. While it's doubtful Abbey will turn out to be Rose herself (why would Rose date her girlfriend's brother?) it's also possible that Abbey's a criminal who changed her face. Or she could be Anezka because honestly where has she gone off to? Remember how infatuated Anezka was with Rafael at first? Maybe after she and Scott split, Anezka decided becoming Abbey would be a good way to start over.

Or maybe Abbey really is who she says she is. Petra and Jane both seem to like her and thus far the only suspicious thing about her is that the narrator keeps hinting there's a reason he keeps forgetting about her. While it's always good to trust the narrator, this doesn't necessarily mean that Abbey is doing something criminal. It could just mean that Rafael and Abbey's relationship isn't built to last, which is why they're not seen together often.

Hopefully fans will learn the truth about Abbey and where exactly she came from soon, so we can get to the bottom of this mystery once and for all.