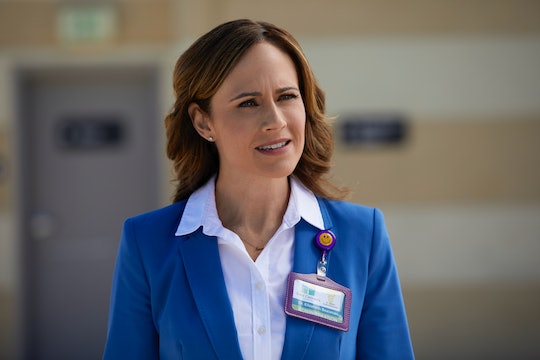 It must be so hard to be an actor with kids. Actors talk all the time about being on set for 12-hour shoots or flying off for months to film something on-location. I mean, can actors bring their kids on set? Well, according to Nikki DeLoach, that's one of the reasons she loves doing Hallmark movies. At Hallmark, she's been able to actually bring her two young sons to set with her so she can spend a little extra time with them during the day. Obviously there are practical barriers to anyone bringing their toddler-age children to work, first among them being that toddlers aren't generally known for their excellent behavior. But for DeLoach — it worked. And if you talk to her for any amount of time, as I did when she dropped by the Romper offices, you'll notice right off the bat she's happy to talk about her kids all day long.

DeLoach's experience as a mother has been particularly difficult. After her first son, Hudson, was born, she suffered severe postpartum depression, which she has been very open about. Then, her second son, Bennett, was born with heart defects and had to have open heart surgery as a newborn. DeLoach told the story of Bennett's harrowing birth in a moving essay in People. When she was five months pregnant, DeLoach said she learned that her son had several heart defects and he might not live. As a newborn, he underwent open heart surgery, and now a little over a year old, he has just gone through his second surgery.

So while it’s been the hardest two years of my life it’s also been the greatest gift I've ever been given because I’m a completely different person on the other side of all this.

Though Bennett is a happy, healthy baby boy now, DeLoach says getting there was incredibly hard. And it does have a tendency to put everything else into perspective. And for that — she's grateful, believe it or not. Now a spokesperson for the Children's Hospital Los Angeles, DeLoach spends a lot of time with families in similar situations. "When you see these parents persisting and being so resilient it is a very inspiring thing to go through," she says. "So while it’s been the hardest two years of my life it’s also been the greatest gift I've ever been given because I’m a completely different person on the other side of all this."

DeLoach explains that since having Bennett, it's been important to find work where she can keep her boys close and with a flexible schedule. She began acting in Hallmark movies soon after Awkward ended (the sleeper hit show in which DeLoach plays main character Jenna Hamilton's mom) and she needed a job. Hallmark was perfect.

"I did two Hallmark movies back to back and I was able to bring them with me," she says. There are, of course, practical reasons taking your kids to work is not always feasible for many people — small children do tend to require a lot of attention. But for DeLoach it worked, and her older son, Hudson, loved it.

And he is clearly a kid after my own heart. "Hudson is five, he’s obsessed with snacks. He’s constantly like 'snack snack snack,'" she says, doing a pretty accurate impression of my own grumpy hungry voice. "And so on set you know there’s craft services and he was just at the craft services table the whole time." According to DeLoach, he also had very little interest in acting in front of the camera himself, but was "more fascinated by what happened behind the camera."

Of course, DeLoach can't take her kids on set with her every day, and there were times she had to be away from them while filming. But while Hudson couldn't really appreciate his mom's performance in a Hallmark film, it did at least clear up some questions as to her whereabouts. "He sort of figured out as we were watching the movie that 'oh that’s why you went away.'"

In her latest Hallmark movie, Love Takes Flight, DeLoach plays Lizzie Beauman, a single mom who's daughter befriends a widower — eventually leading Lizzie to true love with a handsome pilot. Other Hallmark titles Deloach has acted in include The Perfect Catch, Christmas Land, A Dream of Christmas, Truly, Madly, Sweetly, and Reunited at Christmas, which she also developed and executive produced.

Working parents in all kinds of industries are getting more creative with balancing being with their kids and getting back to work — whether that's baby-wearing in the office or figuring out a work-from-home schedule. Being a working actor comes with its own complications but DeLoach has found her own balance.