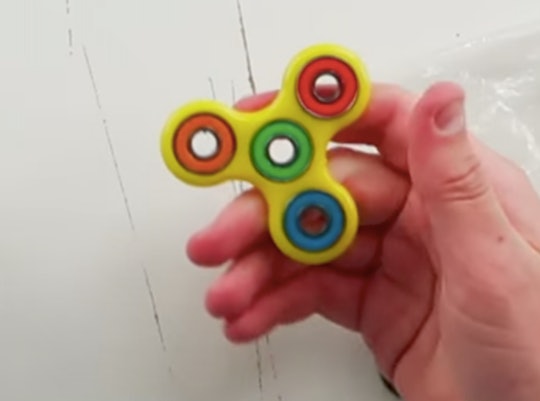 Can Adults Benefit From Fidget Spinners?

Fidget spinners are the latest craze to hit the toy market, and you've probably seen or heard of them by now. Fidget spinners are a small, palm-sized gadget, touted as helping increase attention and focus in users. As a result, fidget spinners have recently been making headlines for being beneficial for kids who have Attention-Deficit/Hyperactivity Disorder (ADHD) and autism. As fidget spinners gain popularity, a new question arises: can adults benefit from fidget spinners?

Fidget toys, objects that people play with while thinking of something else, have been said to increase focus, help sustain attention, and boost memory, according to research out of the Polytechnic Institute of New York. Previous research has shown that minor distractions improve focus by giving the mind a break. As noted by Flushing Hospital Medical Center, everyone fidgets — fidgeting is our way of releasing our body's restless energy. Fidgeting is often seen as counterproductive to learning and listening, but, if directed properly, fidgeting can actually enhance learning behaviors.

Fidget spinners and toys can help to channel common restless body energy. Because they are self-regulation tools to help with focus, attention, calming, and active listening, as Flushing Hospital Medical Center mentioned, they can direct restless body energy in a productive way.

Fidget spinners are largely being marketed towards children, but seeing as how kids don't necessarily just grow out of their needs to fidget, fidget spinners can be a useful tool for adults, as well, BBC noted. Fidget spinners could also improve your work by giving you a way to release nervous or bored energy, according to Forbes. Another plus is that if you're playing with the spinner, your face is not buried in your phone or other tech device.

Fidget toys can be appropriate for all ages, but there's no hard or fast evidence saying that it absolutely will be helpful for you. If you're interested in whether fidget spinners can be beneficial in your daily life, it never hurts to try.