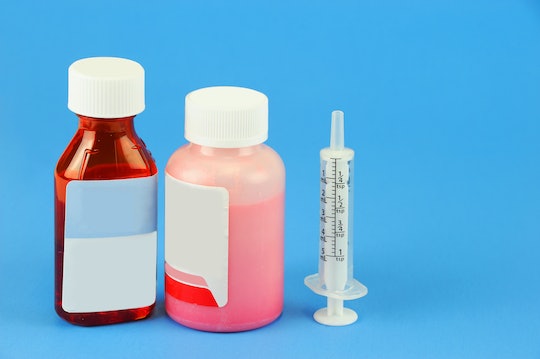 Here's The Truth Behind Antibiotics & Yeast Infections In Children

A yeast infection is not something one normally associates with childhood. In my experience, I associate yeast infections with extreme grumpiness after partying too hard at an all-night wedding while making the unfortunate wardrobe choice of two pairs of Spanx. However, that's not the only yeast infection that exists. Nope, there's a whole range of candida lurking around every corner and Spanx aren't the only cause. Children can get them too, even, and especially, if they're being treated for something else. Is it the fault of the treatment? Can antibiotics cause yeast infections in children?

Candida, or yeast, is a naturally occurring substance in the body, but the problem begins when there is an overgrowth of this yeast in the body. It is found on the skin, in the mouth, throat, in the digestive tract, and anywhere mucosal membranes are found, according to Stanford Children's Hospital. The reasons for yeast infections occurring in children are much the same as the reasons they occur in the adult population, and yes, antibiotics used to treat bacterial infections can contribute to an imbalance of yeast in the body, which eventually presents itself as an infection, noted Stanford Children's Hospital. The treatment for the yeast infections may be an anti-fungal remedy like Monistat in the form of suppository or medicated mouthwash.

Unfortunately, when it comes to yeast infections brought on by the administration of antibiotics, there isn't a great deal of prevention to be done, according to pediatric nurse, Brenda Spoonaker RN of Tampa, Florida. She tells Romper that at this point you just have to take your child to see their pediatrician who will determine the severity of the infection and the course of treatment to take. "When a yeast infection happens because of diapers or sweat, we tell parents to allow their child to go without a diaper for a period of time. An 'airing out' of the area so that yeast isn't given the environment to grow and multiply easily." That's not the case with antibiotics, though.

"Antibiotics throw the system out of whack and attack all of the bacteria in the body, including the good bacteria that keeps the yeast in check. Without it, candida has the ability to grow at a fast clip and overwhelm the immune system response, causing irritation, discharge, and discomfort." Spoonaker notes that not all yeast infections attack the genitals. Oral thrush, yeast in the throat, and digestive yeast overgrowth are also common in children and young adults.

Can antibiotics cause yeast infections in children if they're not the ones taking them? That is to say, are antibiotics in breast milk able to kill off bacteria in babies to the point where they develop a yeast infection? Spoonaker says yes. "Oral thrush is observed in babies whose mothers are given antibiotics to treat an infection. The treatment is simple and simply applied by cotton swab, toothpicks, or toothbrush dropped with the medicine. What you're looking for are white dots on the tongue or lips," she explains. "For the mother, a round of Diflucan is often prescribed because chances are if the baby has thrush, so does the mother to some degree."

If you've ever experienced a yeast infection, you know how unbelievably uncomfortable the experience is. The last thing you want is for your child to have to go through it, but it's one of those almost unavoidable plagues of being a human. Our body is a delicate balance of bacteria, fungus, and everything else that colonizes on and beneath our skin. The best thing to do for your child, according to Spoonaker, is to get them seen right away and follow the course of treatment to the letter so that your child can heal and be back to their normal routines as soon as possible.