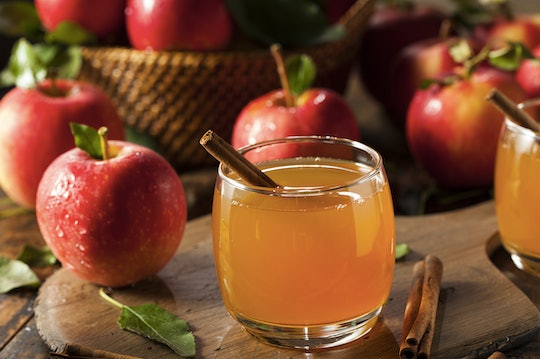 Anyone who has experienced morning sickness, or has been close to someone who has, knows that a pregnant woman will try almost anything to get rid of this often debilitating pregnancy symptom. Many "cures" have been offered up to those of you who have worshipped at the altar of the porcelain throne, but not all suggestions are created equal. Sometimes ginger candies, ginger ale, and sucking on lemon simply don't do the trick. So how about we take our thinking a tad outside the box. Can apple cider vinegar help with morning sickness, perhaps? Before you start dry heaving again, I'd say it's worth the consideration.

For probably as long as women have been procreating, there have been women trying to find remedies to morning sickness. Unfortunately, apple cider vinegar may help some, but it is not a cure-all. By definition, and according to the American Pregnancy Association (APA), morning sickness is that all-around gross feeling you get in the first trimester of pregnancy (though it is not limited to that trimester) that often leads to vomiting. The APA goes on to add that morning sickness (nausea and vomiting) usually begins around sixth week of pregnancy, and seems to stop after the 12th week. And despite its name, it can occur at any time of day. Some women experience it throughout their entire pregnancies, up to the day they go into labor.

And as APA states, more than 50 percent of pregnant women experience morning sickness, thanks to all those hormones ramping up in your body. Specifically, the culprits are the pregnancy hormones hCG and progesterone (a hormone which makes digestion more difficult, go figure). According to the JAMA network website, nausea and vomiting affects 85 percent of pregnant women. So, basically, we can agree that morning sickness is a very common thing. Many doctors feel that morning sickness is an indication of a healthy pregnancy, as it means the placenta is developing well. For all you half-glass-full ladies out there, here is your silver lining to staring at all that porcelain in your toilet bowl.

In rare cases, morning sickness is so severe and persistent it is categorized as hyperemesis gravidarum - which usually means you're vomiting so often you can't keep food down. As the Mayo Clinic's website states, this type of morning sickness can, in some cases, lead to hospitalization, where doctors will most likely treat you with an IV or anti-nausea meds. Still, hyperemesis is quite rare. According to the APA, it occurs in less than 200 pregnancies.

So what's a mom-to-be supposed to do to manage all these "just wanna hurl" moments throughout the day? Most of the expert websites all agree that there are some easy ways you can try to prevent pregnancy nausea in the first place. On the Mayo Clinic's website, the following tips are offered: eat non-greasy foods that are high in carbohydrates, proteins, and low in fat, have snacks throughout the day and especially first thing before getting out of bed, drink plenty of fluids, suck on hard candies, ice chips, and ice pops, breathe fresh air, and pay attention to taking those prenatal vitamins even though they look like something you would feed a horse.

According to the Mayo Clinic's website, a variety of alternative therapies have been explored as well, from hypnosis, to acupuncture and acupressure, to aromatherapy. But in terms of foods that can help with nausea, the food that keeps coming up in research-based articles on pregnancy-related nausea is not apple cider vinegar, but ginger or herbal ginger supplements. In a study published on the US National Library of Medicine (NLM) National Institute of Health (NIH), that looked at the effects of nausea and vomiting on pregnancy, "Ginger is the single nonpharmacologic intervention recommended by the American College of Obstetrics and Gynecology." A 2016 JAMA article found that for mild pregnancy nausea-induced symptoms, ginger, (among other remedies such as vitamin B6, antihistamines, and a drug called metoclopramide) had greater benefit than a placebo.

Apple cider vinegar, though touted on many alternative medicine and alternative health websites, does not boast the same kind of science-based support as ginger, with regard to its effects on morning sickness. There do not seem to be many academic studies on the topic of apple cider vinegar and morning sickness. On the NLM/NIH website, there are a variety studies looking into how apple cider vinegar use impacts things like cardiovascular health, diabetes, and topical treatments of wounds, but not nausea or pregnancy-related nausea specifically. A 2006 study on the NLM/ NIH website makes a particular effort to examine the near-folkorian claims that have been attributed to apple cider vinegar's medicinal uses, and measure them against scientific fact. Their conclusion? Vinegar, while affordable and appealing as a remedy, is yet to be proven a useful "adjunct therapy" for individuals with diabetes or prediabetes, and is not useful as an anti-infective agent topically or orally.

Sure, plenty of first-person accounts exist, wherein women espouse how much apple cider vinegar has helped with their morning sickness, but without a quantitative study, you can't say definitively if it's proven to help. This does not mean apple cider vinegar isn't worth the old college try, however. When you're suffering and running to the nearest trash can in sight, you probably are game to try whatever, as long as its safe. And, of course, if the idea of it doesn't make you want to hurl.