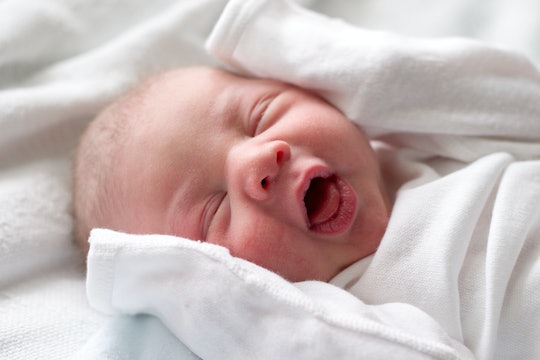 A Baby Girl Was Born With A Teeny Tiny Tooth... But Just How Often Can That Happen?

Considering the fact that babies exclusively consume liquids for the first few months of their life, it would make sense that babies are born without teeth — or are they? DUN DUN DUN... Recently, a newborn came into the world with one teeny-tiny tooth, and she's making headlines for getting it removed at just 12 days old. That being said, one has to wonder: Can babies be born with teeth, and how frequently does it happen?

More Like This
Here's What You Need To Know If (When) Your Baby Eats Sand
How Close Are We To A COVID-19 Vaccine For Children?
Can You Sunbathe During Pregnancy?
The Cutest 4th Of July Outfits For Babies, Toddlers, & Kids

Jasmin Heasman of Plymouth, Devon in England recently gave birth to a baby girl named Isla-Rose, the BBC reported. Isla-Rose was inexplicably born with a small tooth, aka a natal tooth, coming out of the center of her bottom gum. After an evaluation, according to the BBC, doctors decided the tooth should be removed. "She had to have it taken out as it was wobbly. She was braver than me, she didn't really cry," Jasmin said, according to the BBC. "I had to go out of the room crying because I couldn't stand seeing my princess in pain. It looks weird her not having a tooth now."

Dr. Alaa Jebur is the dentist who removed Isla-Rose's tooth. She was only 12 days old during the procedure, making her the practice's youngest dental patient. Dr. Jebur told the BBC that newborns are too young for anesthesia, so she gave her numbing cream to make the removal less painful. Luckily, Isla-Rose "hardly made a sound," and her teeth should develop normally, the dentist told the news outlet.

So when do most babies grow their first tooth? Typically, this happens when children are around between 5 and 7 months of age, according to BabyCentre UK. A baby can start teething, which is when teeth start breaking through their gums, often causing discomfort, when they are just 3 months old, according to KidsHealth.

Approximately one in every 2,000 babies are born with natal teeth, according to Stanford Children's Health's website. Natal teeth can present several risks, Stanford Children's Health explained. For one thing, natal teeth are often loose, as the tooth's root is usually not fully developed — this presents the scary possibility that the tooth could fall out, and the baby could accidentally swallow it or even choke on it. Additionally, a natal tooth can potentially hurt the baby's tongue, or hurt the mother's breast if she is breastfeeding. According to Stanford Children's Health, natal teeth are removed on a case-by-case basis. The baby's doctor or a dentist will evaluate the baby's natal tooth to determine if it poses any of the above risks and needs to be removed.

Romper reached out to Dr. Jarret Patton, a board-certified pediatrician and author of Whose Bad @$$ Kids Are Those? A Parent's Guide to Behavior for Children of All Ages, to get more information on natal teeth. "Newborn, or natal, teeth are pretty rare," he tells Romper via email. "Only about 1 in 2,000 or 3,000 babies have them. Usually they cause no problems and do not have to be treated."

He added, "However, if there is discomfort either from the baby or the mother, extraction may be considered. Most commonly the tooth is removed when it is loose so that the baby does not choke if it falls out."

Romper also spoke with Dr. Alison Mitzner, a board-certified pediatrician based in New York City. "Often there is nothing to do unless it is causing a problem or difficulty with mom or baby. The tooth can sometimes be loose as well since the root isn’t fully developed," she tells Romper in an email. "In this case, a pediatric dentist should evaluate if further management is needed and next steps, such as removing the tooth to prevent any complication or problem."

Dr. Mitzner added that if the tooth is "wobbly" as Isla-Rose's was, it might become dislodged, which could pose the danger of getting into the baby's airway. However, she adds that a natal tooth is "not necessarily a danger but there may be problems with breastfeeding, such as discomfort for the mother, and also the infant may bite the mother. For the baby, this may cause irritation or injury to the babies tongue when feeding."

Interestingly, when a natal tooth is removed, the child will never grow another baby tooth in that spot, a professor of clinical pediatric dentistry at The Ohio State University College of Dentistry named Dr. Homa Amini told LiveScience. Instead, an adult tooth will grow there, typically when the child is 6 or 7 years old.

So if you ever happen to give birth to a baby with a tooth, fear not — your doctor should be able to guide you in the right direction.