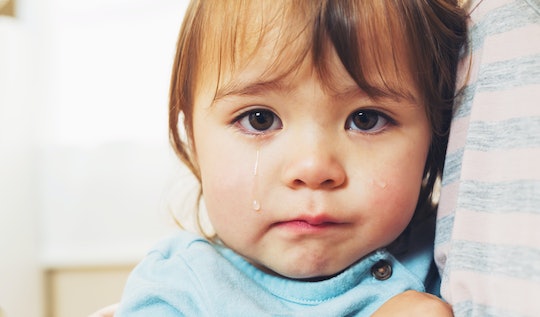 Can Babies Be Depressed?

In recent years, the seriousness of depression has rightfully gained more attention. Everyone from new moms to adolescents are (hopefully) being taken more seriously when seeking help for symptoms of depression. But another group of people has recently garnered more study: infants. Can babies be depressed, and what are the signs of infantile depression?

Before diving in, it's helpful to understand a little about the basics of depression. As noted by the National Institute of Mental Health (NIMH), depression is a mood disorder that can affect the way you feel, behave, and think. Typical symptoms include irritability, fatigue, and sleep problems, as further explained by NIMH. It has been diagnosed in adults, adolescents, and children, but what about babies?

Granted, you're unlikely to see a baby on a psychiatrist's couch anytime soon, as talk therapy isn't very helpful when you're still preverbal. As with many things related to the world of infants, the exact workings of their minds are still largely a mystery. But as noted in Very Well, plenty of mental health professionals believe that babies can become depressed. Although it may be easy to write off this possibility — what on earth would a baby be depressed about anyway? — growing research suggests this may indeed be the case. In fact, as many as one out of 40 infants may deal with symptoms of depression, as noted by ABC News. And, as with many findings about infants, the idea of infantile depression appears to raise more questions than answers.

In general, the type of depression that affects infants is still debatable. Depression is generally categorized in two types: primary and secondary. Primary depression appears to be caused by a (possibly genetic) psychological instability, as it does not appear to be triggered by any particular outside events, as noted by PsyWeb. On the other hand, secondary depression is caused by an upsetting life event such as death or divorce. According to a study in Child & Adolescent Psychiatric Clinics of North America, infants who were separated from their caretaker exhibited signs of secondary depression, or a low mood directly resulting from this separation. However, more research is needed to determine whether infants may experience instances of primary depression, or these occurrences of low mood without a corresponding traumatic event.

As a caregiver, you may greet this news with mixed feelings. After all, you're expected to guard your baby against anything from SIDS to food allergies, and now infant depression? It's a lot to take on, especially when the studies of infant depression are still so relatively new.

That said, being informed about infant depression can only help. According to Very Well, the potential signs of infant depression include a baby who is subdued, withdrawn, and reluctant to smile. If any of these sound familiar, or you're concerned about your infant's mood for any other reason, then a talk with your pediatrician may help you and your baby get to a better place soon.