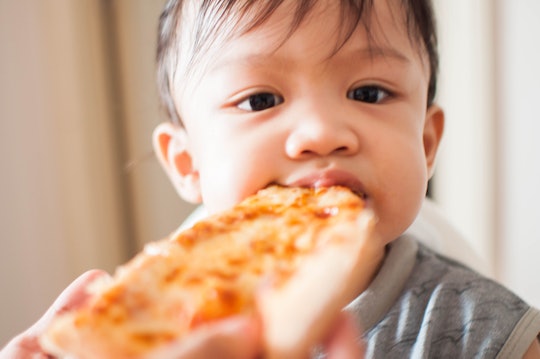 When your sweet little baby switches from an all-liquid diet to one that includes solids, figuring out what foods to feed them becomes an exciting and stressful process. Starting off with traditional baby food purees is fairly simple, but things get a bit harder once they start eating finger foods or if you're trying baby-led weaning. Eventually, you'll want baby to join in your own family dinner traditions, but can babies eat pizza?

Pizza is one of those foods you might want to introduce to baby as soon as possible. For one thing, it's delicious, and you want your little one to love it just as much as you do. For another, it makes for an easy and fast meal, so it's definitely something most parents will eventually want to incorporate into their dinner routines. And who can pass up pizza night?

But there are questions. Is pizza safe for babies to eat? Does it pose a choking hazard? Is it too greasy for their tiny little bellies? If you do introduce it, how are you supposed to do that the right way?

Most doctors agree that babies can eat and enjoy pizza, but it's probably best to wait until they hit that one-year mark (at the earliest) to introduce it into their diet. Dr. Uma S. Levy, pediatrician at Northwestern Medicine Central DuPage Hospital, recommends waiting until babies are 12 to 15 months of age, telling Romper, "Babies should be able to sit independently, feed themselves with their fingers, and have experience chewing and swallowing solid foods with some texture prior to tackling something like pizza." And don't feel like you need to wait until all those little teeth break through. "Not many teeth are required," Levy adds. "Babies are perfectly able to chew most solid foods with their gums alone."

You also need to think about what's going into the pizza before handing it over so you don't have to worry about a potential allergy. "Since pizza is a food with many different ingredients, be sure that your baby has tried the potentially allergy-causing ingredients in pizza — like dairy, wheat, and meats — individually beforehand," says Levy.

Speaking of all of those ingredients, it's worth noting that some pediatricians think twice about pizza for babies. "Pizza sauce is relatively acidic and may be too acidic for an infant," says Dr. Sylvia Owusu-Ansah, assistant professor of pediatrics at Children's Hospital of Pittsburgh of UPMC. She notes that the sugar and salt content of pizza may be a lot for your baby to process, and that lots of toppings could be too difficult for your baby to eat.

Ultimately, it's up to you as a parent to decide whether or not your child is ready to eat pizza. Just make sure you introduce it to your baby in a safe manner. The crust and toppings should both be soft enough that they're easy for baby to chew and bite on their own, and the pizza should be cut into small pieces. Levy recommends using kitchen shears to do this easily. "Give your baby only a couple of small pieces at a time so that they can pace themselves and reduce the chance of choking. Observe your baby closely to make sure the pieces aren’t too large or crunchy," She adds. She also suggests starting with a small portion of about half a slice cut up into small pieces.

Homemade pizza is really going to be your best and healthiest option. "Foods that are made at home, when you can control the ingredients that you’re adding to them, generally tend to be healthier," says Levy. "For babies and young children, I’d advise using a whole wheat or whole grain crust, whole milk (rather than low-fat) cheeses, plenty of fresh vegetables, and keep the seasonings simple." If you do use a store-bought pizza or one from a restaurant, she recommends adding fruits and veggies to the side for a well-balanced meal.

Dr. Sylvia Owusu-Ansah, MD, MPH, FAAP, Assistant Professor of Pediatrics and director of Pre-hospital and EMS at Children's Hospital of Pittsburgh of UPMC