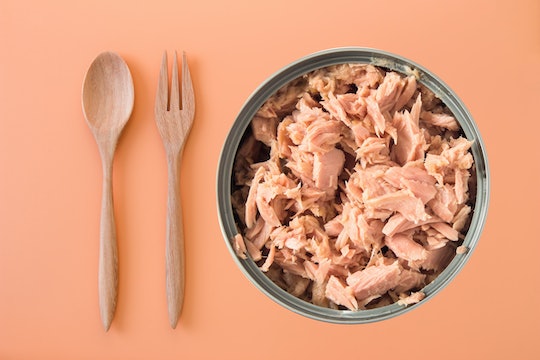 Once your baby starts eating solids, deciding on what to feed them can be quite the adventure. But while most food items sound like an obvious yes for babies (yogurt! bananas! applesauce!), some of your favorites might not sound that great for a 6-month-old, like seafood. For an easy protein, babies eating tuna sounds simple enough, but is it safe? In the beginning, the purees are pretty straightforward — it's all just a blur of mushy fruits and veggies, with some oatmeal possibly thrown in for good measure — but as they get older, their diet can become a little more sophisticated. You can start adding meats, eggs, and — yes — even seafood into the mix, which is exciting (if not a little bit scary).

Turns out, tuna is a healthy addition to any diet, and the canned variety is inexpensive and accessible to boot. It's packed with omega-3 fatty acids, protein, selenium, and vitamin D, according to Healthline, all of which have lots of amazing health benefits that you would, ideally, like your child to take advantage of. That being said, it's hard not to worry about the potentially high levels of mercury in tuna that you, uh, probably don't want your baby consuming.

So what's the deal? Should you avoid tuna or let your baby try it out? In an email interview, Florencia Segura, MD, FAAP, of Einstein Pediatrics, explains to Romper that seafood is a great addition to a baby's diet: "Fish is incredibly rich in high-quality proteins, vitamins, and minerals, as well as omega-3 fatty acids such as DHA and EPA that are essential for a child's developing brain, nervous system, and vision." Meaning... tuna is a go?

Not so simple. Segura goes on to say that parents should avoid feeding babies fish that contain high levels of mercury, as that can be harmful for a child's developing nervous system. The list of fish you should probably avoid would include big-eye tuna, swordfish, and shark. But that doesn't mean all tuna should be avoided: light tuna is a great option for babies and small children.

Segura explains, "Light tuna means it has a pink-ish color as compared to white (albacore) and yellow fin tuna, which is also white and contains three times more mercury than canned light tuna." This means taking a little bit of a longer glance at the canned tuna varieties in your grocery store.

There are also some recommendations on when and how often your little babe can enjoy tuna. You can start serving up tuna as young as 6 months old, although you can of course wait a bit if you want. As for how much they should have, it generally depends on their age. "For children over the age of 2, the EPA and the FDA have issued guidelines that recommend one to three servings depending on the type of fish," Segura says. "For children, a serving is 1 ounce at age 2, and increases with age to 4 ounces by age 11."

Kacie Barnes, a registered dietitian nutritionist who works with parents of babies and toddlers and founder of Mama Knows Nutrition, tells Romper in an email interview, "Around one to two times per week is an appropriate amount of tuna for a baby. Although I recommend feeding them other fish as well for nutritional and taste variety."

Start by giving them about one tablespoon of tuna at a meal, but don't pump the brakes if your baby wants more. "It's OK to let baby have some more if they are still hungry. It's not dangerous for them to eat a few servings of tuna," says Barnes. And while this probably goes without saying, it's worth pointing out that Barnes is adamant that tuna should always be cooked for your child. "Raw tuna or raw sushi is not considered safe for babies."

Basically, it's totally safe — and nutritious! — to give your baby tuna after 6 months old. Stick with the light tuna option and don't go overboard with your serving sizes, and babe should be just fine... and probably nice and full.