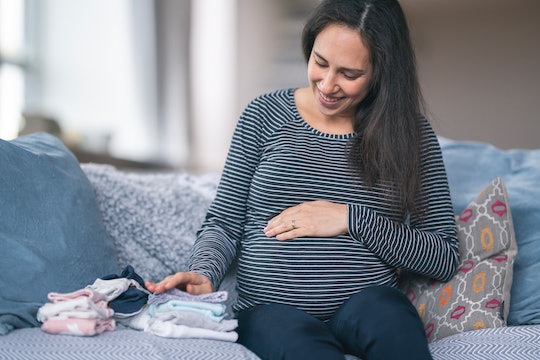 Oh Yeah, Your Baby Can *Totally* Feel When You're Poking Them Through Your Stomach

When you're pregnant, you're constantly thinking about the little one growing inside you. What are they aware of? What do they feel? You play music for them and talk to them constantly, hoping for interaction, but is it real? Science says babies are more aware than you might think, but the real question is if babies feel when you poke on your belly. I mean, sometimes a jab in your stomach gets a kick in retaliation, but is it just a coincidence?

Babies begin to process their surroundings in the womb fairly early, noted OB-GYN Jamie Morgan, M.D. on the University of Texas Southwestern Medical Center website. She wrote that at about 8 weeks of age, babies begin to develop the sense of touch, but contrary to what you might have heard, they don't actually feel pain until after 30 weeks gestation.

As for what they're feeling, and if they're interacting with you as you press down on your baby bump, it seems as though they can and do, notes Kecia Gaither, Director of Perinatal Services at NYC Health + Hospitals/Lincoln.

"Absolutely, babies can respond to touch," she tells Romper, confirming many moms' suspicions. I remember pressing down on the thin skin of my heavily pregnant bump, only to have an elbow or a foot kick up in the same place where I had pressed. It was like my very own version of "tag" or "follow the leader." It made me feel connected to my babies in a way that I wasn't getting purely by serving as their incubator.

"Multiple studies have been conducted looking at fetal response to mom's touch — there was noted to be more movement," Gaither says, especially fetuses that are older in gestation. So at the end of your pregnancy, when you find yourself repeatedly tapping on your belly saying, "Oh for the love of Pete, could you please come out, now?" they notice. That little baby might not understand your wishes (even though I'm pretty sure mine did and was just being obstinate, if I'm judging by his 12-year-old persona), but they did feel you tapping, rubbing, and sometimes jabbing at your bump to spur them into action.

But did my baby also hear my spoken words of eviction? Gaither says he did. "Babies additionally are able to hear past 24 weeks, and can respond to music, mom's voice, and loud sounds in utero. So go ahead, rub your abdomen and talk to your baby.”

I played my son a ton of Johnny Cash when I was pregnant, and while it's probably not the most appropriate of tunes, "Folsom Prison Blues" was his favorite song as a baby. Don't worry, I never encouraged him to go around singing about shooting a man in Reno. But now that I know for sure that babies can feel it when you press on your bump, I probably would have had more fun with it. So if you're still cooking your own little one, keep it up. You might be the incubator, but you're also the entertainment coordinator it would seem. Might as well make it a party.