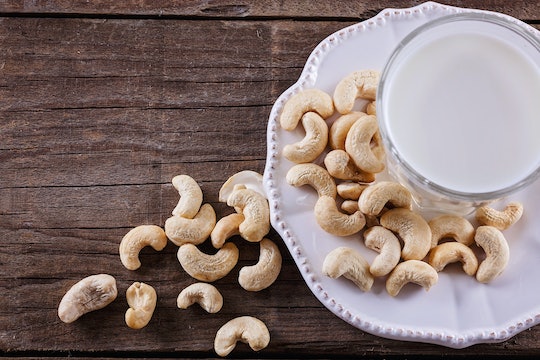 Can Babies Have Cashew Milk?

Full disclosure — I am a vegan. That being said, my children are not. However, they are allergic to dairy — both the casein and the lactose. When they turned 1, the pediatrician said to give them soy milk, but now there are other dairy-free options, like cashew milk. So can babies have cashew milk? Is it better than soy milk? Does it taste better than almond milk? Most importantly, is it safe?

The American Academy of Pediatrics (AAP) recommended full-fat cow's milk beginning at 1 year old, but, that's not always possible due to dairy allergies and AAP recognized that. In lieu of cow's milk, the AAP suggested soy milk — which is also not always possible. At that point, each child needs to be evaluated by a pediatrician on a case-by-case basis to determine an appropriate dairy alternative. The website for Dr. Sears noted that whole cow's milk is preferred because it packs a nutritional punch. It has a lot of fat, vitamin D, protein, and calcium in a small serving.

Cashew milk, on the other hand, is a relatively new product, and hasn't been studied as widely. It's also a tree-nut, which is one of the most-common allergens for children, according to Food Allergy Research and Education. This is obviously worrying to those with a family history of allergies, but not necessarily a reason to avoid cashew milk, according to US News and World Report. In that article, it's noted that the AAP released updated guidelines on introducing children to common allergens, like nuts, earlier as a way to prevent a future allergy.

However, cashew milk simply doesn't exist yet in any of the protocols given to pediatricians from the AAP, unlike almond, hemp, and coconut milk, even if a side-by-side comparison of almond milk and cashew milk is almost indistinguishable in its content.

So is cashew milk safe for babies? After your baby is 1 year old, it is safe so long as they don't have an allergy. Is it optimal? Maybe not. The AAP recommended soy milk as the dairy alternative because of the protein relative to the calories in the milk. People tend to shy away from soy, though, because of an old myth linking it to cancer, when in reality, studies have shown that children who drink soy milk are perhaps less likely to develop cancer, according to an article in the Journal of Nutrition.

Only you and your pediatrician — and your baby, because they're ridiculously picky — know what's best for your baby. As always, ask them first. Then go nuts.

More Like This
20 Weird But Genius Health & Beauty Tools For Babies
10 Ways Breastfeeding Is Good For Moms, Too
How Hot Is Too Hot For Babies? Experts Weigh In
There's A Good Reason Why Your Baby Is So In Love With CoComelon