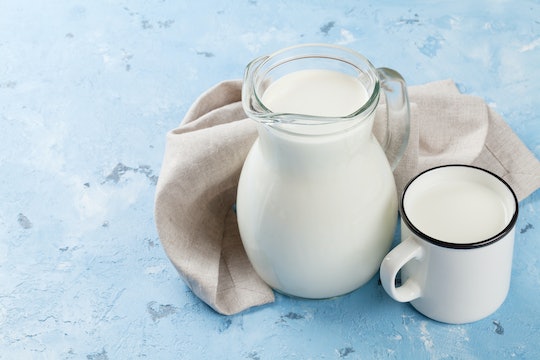 Can Babies Have Goat's Milk?

When my kids ask me why I say "no" to their often mess-inducing demands, I tell them it's because "I'm the G.O.A.T.," which refers to being the "greatest of all time," not the cute little farm animal whose milk has become a popular choice for parents due to its benefits. With all the goodness goat milk has to offer, many consider it to be the G.O.A.T of milks for their kids, but can babies have goat milk?

According to the website for Dr. Sears, when compared to cow milk, goat milk has different fats, minerals, proteins, and lower lactose levels, which allow it to be easier to digest. The benefits may sound appealing, especially for parents whose kids have allergies, or a lactose intolerance. Some parents are even compelled to make their own infant formula out of goat milk, for which the recipes online are numerous, but is it even safe for babies?

Romper spoke with Betsy Marks, MD, Board Certified Internist and Pediatrician practicing in Albany, NY. She notes that, according to the American Academy of Pediatrics, babies under the age of 1 should not be given goat milk. She also says that it's not recommended that parents make their own homemade formulas.

"Homemade formulas and goat milk regimens for babies can cause serious health concerns, including electrolyte imbalances, infection and even death," Marks says.

The American Academy of Pediatrics explained that even for babies with allergies to cow milk, the intact animal proteins in goat milk make it an unsuitable alternative to cow-milk based formula or breast milk.

With all the hype surrounding goat milk, it may seem harmless, but for babies under the age of 1, it's best to stick with infant formula. If you're still considering feeding your baby goat milk, be sure to talk to your pediatrician about the benefits and the risks. You should always do what you think is best with all precautions in mind, because you know you're the G.O.A.T.

More Like This
Double Your Fun With These Instagram Captions For Twin Pics
How To Avoid & Treat Lyme Disease
How To Tell If Your Newborn Is Nursing For Comfort
Why Does My Baby Cough While Breastfeeding? Experts Explain