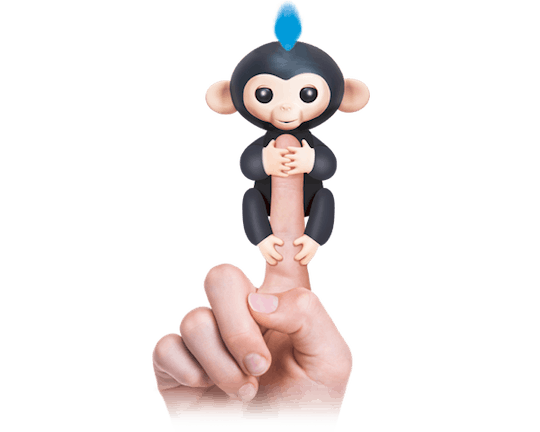 Can Babies Play With Fingerlings? Here's What Parents Need To Know

It might feel way too early to even begin thinking about holiday shopping, but with only a few months until gift-giving season, toy companies are releasing their coolest and most innovative offerings in hopes that they'll become one of the hot toys that seems to be on every kid's wish list. One of the toys that's expected to be majorly in-demand? Fingerlings — small, robotic monkeys that latch on to kids' fingers. Thanks to special sensors, Fingerlings can respond to sound, touch and motion, according to CNN, and the consensus among kids seems to be that they're super cool. But can babies play with Fingerlings? Even though these interactive monkeys will likely get your baby giggling, it's best to give them a miss until they're older. As cute as they might appear, they're not meant for little hands and are instead designed for older kids.

From the looks of it, Fingerlings are basically the equivalent of having a tiny robot pet — they like to be cuddled and kissed, and will respond to kids' actions and touches, but they don't need to be fed or taken care of in any way. And it's not exactly surprising that kids think they're super cool: whether it's a Hatchimal, Tamagotchi, or the days-of-yore Tickle-Me-Elmos, interactive toys have always been majorly popular.

Fingerlings hit the market last month, and are currently sold in the United States at Toys "R" Us, Walmart, Amazon, and Target, and will run you around $15 (that is, so long as you aren't forced to buy one on eBay once they sell out in stores). And, unfortunately for parents whose children are destined to fall in love with these little creatures, there's actually a whole Fingerlings line. According to a WowWee news release, there are six different Fingerlings characters — Zoe, Mia, Finn, Boris, Bella, and Sophie — that each have "unique personalities" (in other words, prepare to stock up). And just in case your child's Fingerling monkey gets bored of hanging off their finger, WowWee also offers three different Fingerling-sized, playground-inspired play sets, too (because, of course there are).

So what does a Fingerling actually do? According to the Fingerlings website, there are a number of ways to get your Fingerling to respond. Tapping the sensors on its head will trigger "a variety of different reactions," and petting your Fingerling on the head will cause it to coo and giggle. Blow it a kiss, and it'll blow you one right back. Cup it on the head? Uh, then it will either fart or burp (but what kid doesn't love a toy with noisy bodily functions?). All in all, Fingerlings are programmed with more than 40 different sounds and movements, which young kids are probably going to find downright delightful.

Because of their small size and breakable parts though, Fingerlings are designed for kids ages 5 and up, according to WowWee, which might be a bit of a bummer for preschoolers with their hearts set on a tiny monkey friend. In addition, the WowWee help page recommends that parents remind their kids to play gently with their Fingerling, so that the moving head, neck and tail don't get broken accidentally.

Fingerlings seem like the kind of toy that would totally captivate babies and young children, but it's definitely a toy that seems best left to the older set. And if you've got kids that range in age, you might want to make sure older siblings' Fingerlings don't end up lying around — the last thing you'll want is to have to explain to your second-grader that his baby sister slobbered on the sensors and broke off his monkey's tail while he was at school.

But hey, if we're talking about interactive toys, why not dig through your childhood toy box and see if there's a Teddy Ruxpin to dust off? Clearly the storytelling bear was the OG interactive toy superstar, and the nostalgia factor can't be beat. Although, according to The Mirror, even he's been primed for a comeback: the popular '80s toy has been given a 2017 Bluetooth-enabled, 4GB hard drive makeover. The only downside? Teddy Ruxpin 2017 rings in at around $100, so he's definitely the more pricey of the two toys. Either way, your child will probably be overjoyed with their new toy, and if they're too young for the Fingerlings, they probably won't even know the difference between it and a similar monkey toy.