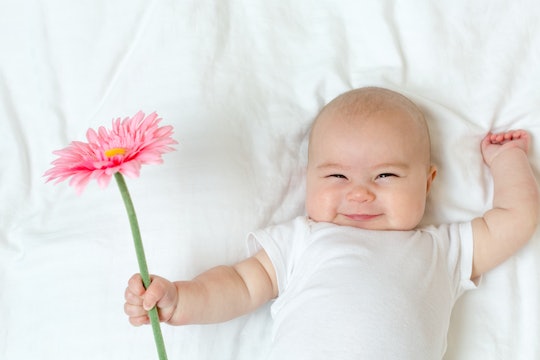 Your Baby's Nose Knows More Than You Think

Babies are born with incredible reflexes and senses. One of the most amazing experiences is watching a newborn do what is called the "breast crawl." This is when a baby is placed on the mother's abdomen, and using an innate crawling reflex, finds its way to the mother's nipple. The baby then self-attaches to the breast and begins suckling. But how do babies who just exited the womb know how to locate the breast? Can babies smell, and is this what helps them find their way to their first meal?

According to the experts, the answer is a resounding, yes.

Parents reports that babies develop their sense of smell in the womb at just six months of gestation. Dr. Seema Csukas, director of child health promotion at Children's Healthcare of Atlanta explained to Parenting that smell is a newborn's most advance sense. Additionally, research studies have shown that infants as young as three days old are able to recognize the smell of their mom's amniotic fluid. By two weeks of age, babies can differentiate between the scent of their own mother's breast milk and another mom's milk. The reason that babies know to turn their heads toward the mother's chest, known as the rooting reflex, is also related to smell, according to the U.S. Department of Health and Human Services.

According to What To Expect, a newborn's sense of smell develops fastest during their first six months of life, and peaks in early childhood, which is why it's common for kids to have a much better sense of smell than adults. But, it's not until around age two that a baby is able to distinguish a pleasant scent from a foul odor.

A baby's powerful olfaction is also one of the things that helps bond a mother and child immediately after childbirth. Parenting suggested that familiar scents, like those of the mother, can soothe a baby. The next time your baby goes in for vaccinations, bring a blanket that was held or covering your baby while nursing. The smell of breast milk and mama will comfort your little one.