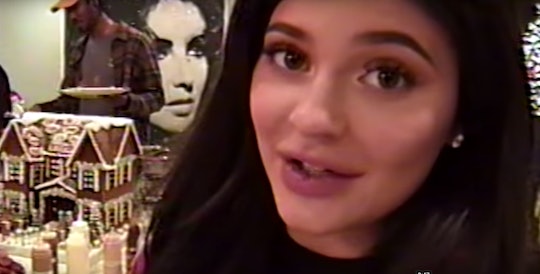 Kylie Jenner & Her Baby Had Dueling Pregnancy Cravings — Is This A Thing?

When you're pregnant, like Kylie Jenner recently was, it can feel like your body and cravings take on a life of their own. Basically, whatever food cravings you have get so specific and strong, you can feel that need for cheese sticks in your soul. It may feel like your developing baby is totally running the show. But can babies taste food inside the womb, and do they even have taste buds at that stage?

In the touching video she released on YouTube titled "To Our Daughter," new mom Kylie Jenner brings up her food cravings, claiming she likes regular fries whereas the baby prefers sweet potato fries. Chances are, moms the world over can related to this idea of baby-directed cravings. So can developing babies actually form their own preferences about food, or is something else going on when pregnant women experience these strong urges for specific foods?

It's possible that your growing baby has some favorite flavors already, at least in a way. By the sixteenth week of pregnancy, infants have developed the taste buds and the ability to taste, according to What to Expect. And although your baby isn't yet eating independently, the amniotic fluid can offer those taste buds a sample of what's to come. Strong flavors such as garlic or curry can come through in the amniotic fluid your baby swallows, as explained by Parents. And even at that stage of life, some babies may start forming opinions about these flavors (to some degree). In fact, some researchers hypothesize that food preferences even begin taking shape in utero. As Peter Hepper, director of the Fetal Research Centre at Queen's University in Belfast, told The Guardian, "foetuses exposed to garlic in the womb are more likely to prefer garlic in later life, indeed studies show up to the age of eight at least." Essentially, familiar foods tend to be the most preferred. If this is the case, then Kylie's baby may have a lifelong fondness for sweet potato fries, or whatever else is routinely on the Kardashian-Jenner menu.

Although pregnancy cravings may be the butt of jokes about pickles and ice cream, the unique food cravings are very real, and for plenty of moms-to-be, very strong. But the true cause of these cravings is still open to speculation. "No one really knows why pregnancy cravings occur, though there are theories that it represents some nutrient that the mother may be lacking — and the crave is the body's way of asking for what it needs," said Andrei Rebarber, MD, associate director of the division of maternal-fetal medicine at NYU Medical Center in New York, in WebMD. Hey, sweet potatoes are a good source of vitamin A, so maybe Kylie's baby needed a little more of that particular nutrient. It's impossible to know for sure.

Another theory speculates that pregnancy cravings are generated by (what else?) hormones. As it turns out, the output of Neuropeptide Y (NPY), a super-powerful appetite stimulant, gets kicked into overdrive during pregnancy, as noted by a study in Endocrinology. This means the pregnant person's overall appetite is generally increased, which will come as news to absolutely no one in the world. But it's possible that this increased appetite is just less deterred by common food aversions, making those seemingly unusual pregnancy cravings more typical.

The full reasoning behind pregnancy cravings is still unknown. "The bottom line is that, although we have some interesting ideas as to what might be causing the specific cravings of pregnancy, we still don’t really know," said Chief Medical Officer at Catasys Omar Manejwala in Psychology Today. For the most part, expectant moms will react exactly as Kylie did, and give that baby whatever food she seems to want.