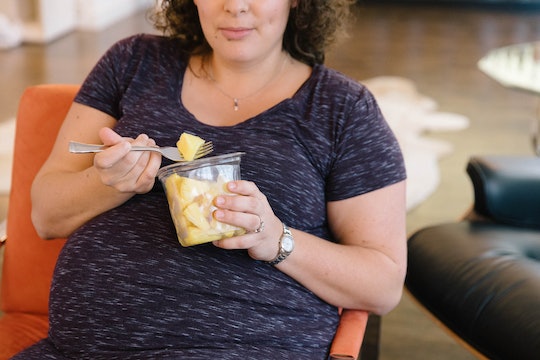 It's the end of what feels like an eternal pregnancy, and you're looking for any and every sign that labor might be starting. Maybe you're having Braxton-Hicks contractions. Maybe you've even lost your mucus plug. You're on pins and needles waiting for labor to begin, but at the same time, you want to be sure that when it does start, it's smooth and not too early. But how does it happen? Can baby cause contractions with a swift kick or movement? Do they just know when to start up labor?

Kathy Fray, a senior midwife, author, and maternity consultant, says its a fair question. "The answer is yes... and no," she tells Romper. "Science does not fully understand the physiological mechanisms of why active labor contractions begin. But we do know that both the mother’s physiology and the baby’s physiology are together synchronistically involved. So yes, it can definitely be said that the baby’s hormones are part of the mechanism that causes labor contractions."

However, Fray says, sometimes women ask this question in reference to the baby's level of physical activity rather than her hormones. In this case, the midwife says, there is nothing to worry about. "Yes, on occasion a baby’s kicks can potentially cause harmless Braxton Hicks tightenings," she affirms. "But no, they are of no concern whatsoever and do no indicate when labor will begin."

Speaking of those misleading Braxton Hicks, a term coined in 1872 after the landmark description of false labor contractions by Dr. John Braxton Hicks, your future soccer player isn't the only thing that can bring them on. The false labor can be triggered by your activity level, dehydration, sex, a full bladder, or even by someone rubbing your belly, according to MedicineNet

Braxton Hicks contractions are notably irregular and non-rhythmic, and most women describe them as uncomfortable rather than painful. Eventually, they taper off and leave the hopeful expectant mother disappointed by the false labor.

Since they aren't actual contractions, there is nothing you can do to turn them into real labor. So if you're like most women you'd probably like to get rid of them ASAP. A few of the tried and true remedies listed by the APA are changing positions, taking a long warm bath, drinking a few glasses of water, or having some herbal tea or warm milk.

But telling the difference between Braxton Hicks and real labor can be tricky. The American College of Obstetricians and Gynecologists (ACOG) even noted that sometimes a vaginal exam is the only way to tell the difference, during which your care provider will examine your cervix for dilation and ripening.

But, according to the ACOG, you can often tell the difference between false and real labor at home by timing the contractions. To do this, note exactly how much time passes from the start of one contraction to the start of the next one. Keep a record for one hour. If the contractions are very consistent, you might very well be in true labor. As you continue to time them, the minutes between contractions should grow fewer and fewer.

If you've already previously had a baby, be aware that you are at an increased likelihood for experiencing promodal labor, which is labor that starts and stops before actual labor begins, per Healthline. Promodal labor can feel equally painful to the early stages of labor, which makes it even more frustrating than your old friend Braxton Hicks.

You might feel like you're really being tested as you wait for signs that the time has finally come, but take heart: No woman in history has been pregnant forever, and you won't be the first.