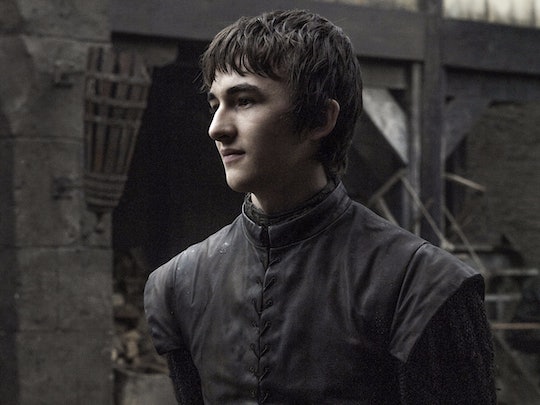 Can Bran Be Lord Of Winterfell On 'Game Of Thrones'? He's Kind Of Busy

After the "Battle of the Bastards", Sansa and Jon finally took back Winterfell and the Stark banner is now back where it belongs. Although the Starks have Winterfell it's anyone's guess who the new Lord (or Lady) of Winterfell will be. Although Jon Snow is older than Sansa he's still a bastard and therefore doesn't have a legitimate claim to the Stark name or Winterfell. Similarly, although Sansa is a Stark through and through, she's still a woman, which means she's not an heir to Winterfell (lame). With Robb and Rickon both gone now (R.I.P.) that only leaves Bran as a rightful heir to Winterfell. But can Bran really be the Lord of Winterfell?

There's a lot of things standing in the way of Bran taking his seat as Lord of Winterfell. For one, he's still north of the Wall and with the White Walkers basically tracking him, it probably wouldn't be smart for him to go back just yet. More importantly, Bran is now the new three-eyed raven, which means he has some greater purpose. Although the tree that the three-eyed raven used to hang out in is now gone, Bran needs to be in a place where he can use his magic freely and be the all knowing raven he's supposed to be.

Bran can't be confined to just doing a Lord's work when he needs to be warging. However, maybe it's possible to do both. No one really knows or understands Bran's warging, and if he wanted to keep it a secret he probably could. It's possible he could rule Winterfell and still warg when he needed to. Plus, Bran may not even need to warg. So far, warging has only gotten Bran into trouble and led to some unfortunate deaths (R.I.P. Hodor and Summer). It could be for the best for Bran to stop warging all together. Or maybe he could train someone else to take his place as the three-eyed raven and pass on the responsibility.

But according to Uncle Benjen, Bran needs to master his warging because he's the key to defeating the Night King and the White Walkers. Until the White Walkers are defeated, Bran will be too busy to be the Lord of Winterfell. But if Bran can't take the position, who will? The most likely choice is for Sansa to take the seat. If Lady Lyanna could do it, Sansa certainly can. Here's to the Queen of the North!