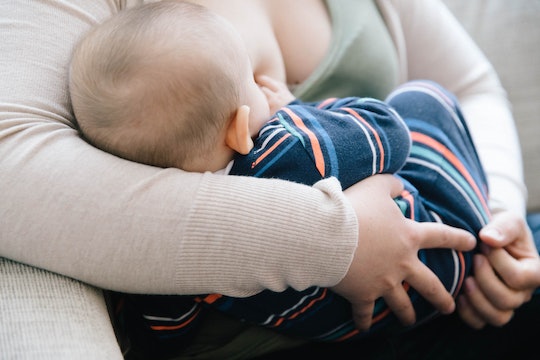 Babies snuffle and cry their way through the colds of the first year, and considering recent understandings of the immunological wonders of breast milk, it makes sense to ask, can breast milk help a baby's cold? It's well known that breast milk contains antibodies that help prevent illness, but according to a 2013 study in Clinical & Translational Immunology, breast milk also changes on a biomolecular level in response to baby's cold.

Basically, breast milk transmogrifies. Likely because it was designed by the wizards at Hogwarts.

Actually, while scientists don't maintain that breast milk transmogrifies, they do say that it's immunomodulatory, containing leukocyets (infection-fighting white blood cells), as well as other anti-microbial and anti-inflammatory properties that contribute to your baby's short and long-term health. The 2013 study zeroed in on leukocytes, noting that colostrum — the "liquid gold" that works overtime to strengthen your baby's immune system in the first week or so — showed a higher leukocyte concentration than mature breast milk. Amazingly, the breast milk of moms of sick infants contained far higher levels of leukocytes than colostrum. When your baby gets sick, your milk gets serious.

How exactly does this crazy magic happen?

Romper spoke with lactation consultant Lindsay Kempenich Greenfield, who explains that "saliva from a sick infant, readily detected at the maternal breast, triggers antibody production against specific organisms that the baby's immune system is currently fighting." Because of this mechanism, Greenfield writes, babies must latch in order to receive the full benefits of breastfeeding.

Breast and baby communicate through a complex cellular dance, and your baby's saliva sends the fastest telegraph to your immune system, letting your body know what antibodies it needs to produce to keep both you and your baby well.

Again I ask, did Hogwarts wizards design breast milk to be this awesome?

Breastfeeding moms know, however, that when baby has a cold, it's not always easy getting her to latch, or to coordinate her sucking with her breathing. Romper spoke with Julie Gladney, International Board Certified Lactation Consultant (IBCLC) at Ebb & Flow Lactation, who suggests sitting in a steamy bathroom to clear baby's congestion before nursing, and holding her as upright as possible when you feed her. She also recommends saline or breast milk squirted up the nostrils to help clear mucus.

"Breast milk is a living fluid, with live immune cells," writes Gladney in our email interview, and those cells are working hard, actively responding to the infections to which both mom and baby are exposed. Gladney notes that during the first six months of life, the baby's own immune system is so immature that antibodies in mom's milk act as a powerful extension of it.

While science doesn't yet show that breast milk is in fact a product of Hogwarts, studies are ongoing. Meanwhile, if your baby comes down with a cold, know that your breast milk is likely helping. Though baby's stuffy nose may make nursing difficult, the immunomodulatory magic is well worth the effort.