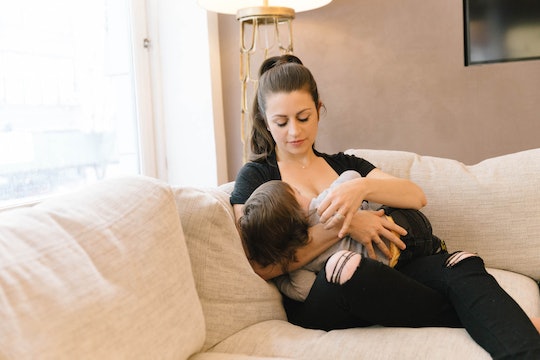 Can Breastfeeding Cause Social Anxiety?

Women often feel damned if they do, damned if they don't when it comes to breastfeeding. It can feel as though everyone has an opinion on who is or isn't feeding from you — it's often as stressful a time as it is beautiful. But can breastfeeding cause social anxiety in a very real way beyond just the pressures of the choice?

Breastfeeding can feel like a juggling act. On one hand, the American Academy of Pediatrics (AAP) advised mothers that they should breastfeed their children for at least one year. This is understandable given the number of benefits that babies receive from their mother's milk and how many experts tell women that breastfeeding is a bonding experience and that it will change their lives forever. That's wonderful, breastfeeding is wonderful, but it's also really hard.

It's curious to think that out of all of the studies and recommendations that tell women to breastfeed, women are still so often shamed for doing it. When my daughter was just a little under 6 months old, I had taken her and my son to a park near our home in Brooklyn on an unseasonably warm late October afternoon. My daughter proceeded to get super cranky as 6 month old babes are wont to do, and the only thing that would calm her was a wee spell of nursing. I was tucked tight on the grass under a shady oak tree, feeding my daughter, when a woman in her mid-50s came up to me while walking her dog. I assumed she was there to comment on my gorgeous children or our ginormous Akita that my son was using as a pillow, but no, she decided to prance over with her Pomeranian just to tell me that I should do a better job at covering up because she could see part of my breast as she walked by. Instead of engaging, I took a page out of my husband's handbook and just alpha stared dead into her eyes until she and her tiny animal walked off in a huff. But this wasn't the first or fifth time someone had told me what or how I should feed my child.

And it's no better when moms are at work. Women all over are posting images of their "designated pumping locations." Some of which are less than sanitary or private. The pumping location at my former employer was a broom closet with a chair and a window that legitimately faced an abandoned mental hospital, and smelled like stale sex and Simple Green.

And if that's not enough, the mom shaming is out of control. Women who cannot or choose not to breastfeed are often made to feel as though they are somehow "less worthy mothers" or "damaging to their children," says Joanna Gross, a Licensed Clinical Social Worker (LCSW) in an interview with Romper. "As far as I'm concerned," Gross says, "there doesn't seem to be a good way to feed your baby, because someone is always there to tell you why you're doing it wrong." She says that this kind of shaming and guilt couldn't come at a worse time. With all of the hormones of pregnancy and the postpartum period, "women are feeling pretty fragile to begin with, and then society goes and dumps all of their crap and expectations on them as though just getting up and brushing your teeth isn't sometimes more challenge than you want to face as a new mom."

When I asked Gross if breastfeeding can cause social anxiety, she pointed me to an article that links exacerbated symptoms of postpartum anxiety and breastfeeding, conducted by the Journal of Reproductive Medicine. Gross also tells Romper that the social part of the anxiety has as much to do with society's attitudes towards breastfeeding in general as the actual act of feeding your child. She remarks that any time social expectations clash from multiple arenas into an area where someone is expected to perform, it's going to cause a level of social anxiety. When you add in the quotidian stresses of motherhood and child rearing, and the expectations every parent has going into it, it's only a matter of time before you feel anxious.

Gross says that the key to combating the social anxiety that moms may be experiencing is to seek supportive environments, and find someone to talk to about it. She notes that if a mom notices it's getting worse, or it's very negatively impacting their lives, they need to bring it up to their doctor. It's essential that mothers try to take good care of themselves so that they're able to take good care of their children, even if it seems utterly unmanageable. Also, I suggest working on your alpha stare. It's helpful.

More Like This
When It’s Safe To Bring Your Newborn To A Restaurant, According To A Pediatrician
Can You Burp A Baby Too Hard? A Pediatrician Shares Tips For Gassy Tummies
Is It Good For Babies To Be Exposed To Germs? It’s Complicated
Celebrate Baby's First Christmas With These 40 Instagram Captions