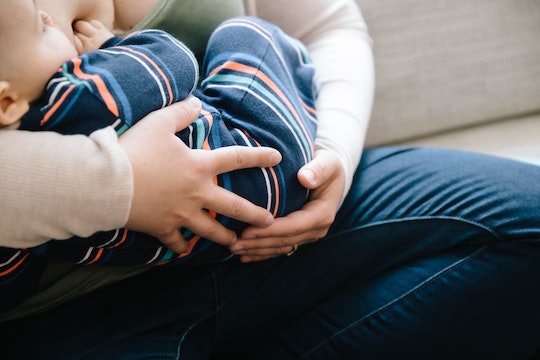 Here's How Your Caffeine Habit Impacts Your Baby's Infant Reflux

There are not many things in this world that could convince a breastfeeding mama to give up her precious caffeine. Between the daytime demands of motherhood and the middle of the night feedings, most mothers I know (myself included) would rather part with the hair on their head than with their beloved morning coffee. But those of us with reflux babies are willing to try almost anything to get more sleep and go a whole day without having to change clothes, because reflux is really the worst. But can caffeine cause infant reflux? Will eliminating it really help your little one?

It's not impossible, says Dr. Clare Bush, Assistant Professor of Pediatrics at Columbia University Medical Center, but unfortunately it's not a guarantee either. "In some cases, a breastfeeding mother can help reduce her baby’s reflux by limiting her caffeine intake. All babies are different and what might help one baby may not help the next," she wisely reminds parents.

But before troubleshooting solutions, Bush says it's important to understand the biology behind the issue. "Most infants have reflux beginning in the first weeks of life, but for the majority, the issue resolves as they grow and does not indicate an underlying problem," she explains. "The muscle at the top of the stomach, the lower esophageal sphincter, is not fully developed in babies. This muscle’s job is to allow food to pass from the esophagus into the stomach. When not fully developed, it can allow stomach contents to go in the opposite direction, up into the esophagus and out, in the form of spit-up," Bush explains.

Sometimes babies spit up because they have taken in air along with breast milk or formula. Working with a lactation consultant to improve your latch could be all the solution you need in this case. In fact, International Board Certified Lactation Consultant (IBCLC) Leigh Anne O'Connor tells Romper that reflux is often an incorrect assumption that parents make about their babies. True Gastroesophageal Reflux Disease (GERD) must be appropriately diagnosed by a pediatrician and the use of medication is warranted. But according to O'Connor, some infants exhibit symptoms of reflux but the cause may be any number of other things such as a mother's fast let-down, a food sensitivity, a tongue tie, or torticollis.

The easiest way to manage reflux-like symptoms is to burp your baby and keep her upright for at least 20 minutes after a feeding, says Bush. This means avoiding tummy time as well as waiting that long before laying him down flat on his back.

In most cases, time really is on your side. For the vast majority of babies, reflux typically improves between six to 12 months, once they have perfected the skill of sitting upright, in addition to gaining better head control and eating baby solid foods.

That being said, Bush reminds parents that, "If your baby’s spit-up is forceful, it looks like they are in pain, you see blood or a dark green color in your baby’s spit-up, or they are having trouble gaining weight, be sure to talk to your pediatrician." Typical baby spit-up is one thing, but troubling medical signs are never to be taken lightly.

Eliminating caffeine is a solution that many breastfeeding mothers try but likely few find truly effective. On an informal Instagram poll I did recently, 80 percent of reflux moms said that their elimination of caffeine did not help alleviate their baby's symptoms. But hey, 80 percent means the experiment clearly worked for a few people, so it may be worth a try for the desperate nursing mom. Maybe you'll do better than I and stick to it long enough to find out.

More Like This
Can You Mix Breast Milk & Formula? Experts Weigh In
Here’s Your Guide To Paced Bottle Feeding
What Is RSV?
Baby-Led Weaning: A Comprehensive Guide To Introducing Solids