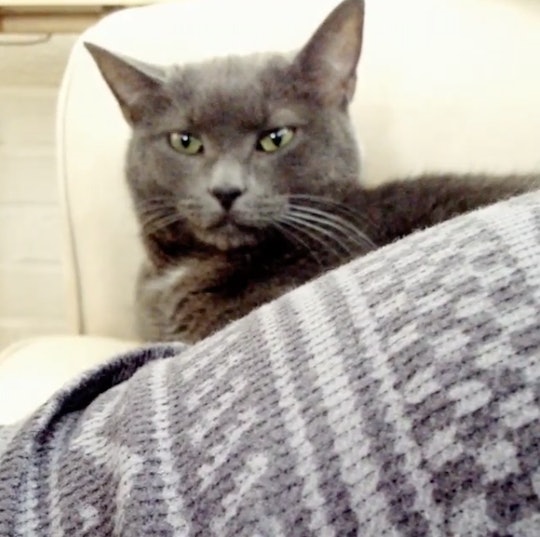 FYI, Your Cat Will, Unsurprisingly, Probably Be Indifferent To You Going Into Labor

My husband Dan and I always joke we have the most dependent cats on the planet. Because if the feline crowd is supposed to be fairly indifferent, then we did not adopt those cats. That's why when I was pregnant with my daughter, I had a lot of time to assess their behavior (because they were always with me) and I was convinced they knew something was different with their human mama. They would prod at my belly and always find a way to sleep on top of it. But did they know I was pregnant? Can cats sense labor? It might all seem a little far fetched, but let's see what the experts have to say.

For starters, while your cat might not be able to sense labor per se, there's a chance they do have a pretty good idea that you are carrying a little one in your belly. Animal behaviorist Nikole Gipps told Baby Center that, while there isn't scientific proof that animals can sense pregnancy, there are enough examples that can point us toward the belief that they are indeed aware. "Your pets probably don't understand that in nine months a new baby will be joining your family, but dogs and cats do detect differences in your mood, posture, behavior, and body chemistry that clue them in to the enormous changes you're going through," she said.

That's right: Like dogs who can sense changes to your hormones and scent, cats might also pick up on the shift in your everyday essence. As a result, your feline family member might become more loving and protective as a result of the perceived shift, but don't be surprised if there also all, you know, cat-like about it.

You should also be prepared for the fact that your cat might become jealous over the arrival of a little one in your home. Cats are known for being rather territorial creatures and, therefore, you might detect a general moodiness once your baby is born. While most cats will eventually adjust, it's a good idea to seek out help from a veterinarian if the behavior persists.

"Cats’ territorial aggression is usually directly toward other cats, but it can be directed toward dogs and people, too," noted the ASPCA, adding that a trigger for this behavior can be major changes in a cat's home life. "A cat can show territorial aggression toward some family members and not others, and toward some cats but not others. Cats mark their turf by patrolling, chin rubbing, and urine spraying."

But as Gipps noted, for most cats your pregnancy will barely register on their radar. "Three of my cats couldn't have cared less about my pregnancy," she wrote. "The fourth decided that my warm, vibrating belly was the best invention since cat food."

The best way to keep cats happy during pregnancy and when your little one arrives? Stick to a routine as much as possible and make sure to give them their space (they are, after all, cats). A cat tower that allows them to feel out of reach or a special cat bed that they can claim might make them feel more comfortable.

Above all, give it time. In my very unprofessional opinion, I can tell you that three years later and all four — crazy cat lady, guilty as charged — of our cats have come around to love our daughter in their own way. Even if it is from very far away, as in the case of our shyest one. But she adores each one of them and I've even caught them showing her the same love they've always shown us, too.