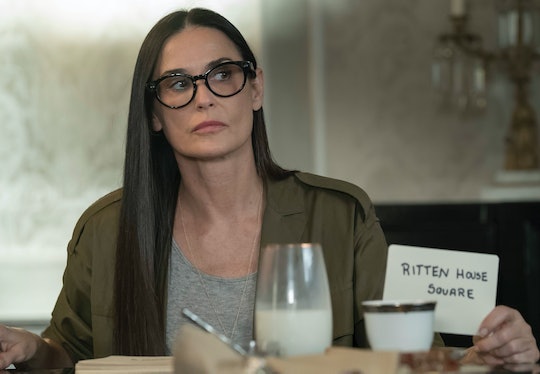 Claudia May Be Up To No Good On 'Empire'

Last season of Empire ended on a devastating note when the Lyons discovered that Lucious had lost his memory. He was injured in a car explosion at the hands of Andre and Shyne, who were planning on killing him (though Andre backed out at the last minute). Season 4 picks up three months after Lucious woke up from his coma, and he's still suffering from amnesia. At his side the entire time is his nurse, Claudia, played to perfection by Demi Moore. But can Claudia be trusted on Empire? She was acting shady in the premiere, and Cookie's already tired of her.

The Lyons are in this situation because of Andre and Shyne. After Rhonda (Andre's wife, if viewers don't remember — the Lyons certainly forgot about her!) passed away in the Season 3 premiere, Andre became more sinister. He decided partway through the season to kill Lucious, with Shyne's help, in order to finally have control of Empire. As it turned out, though, Andre was closer to power than he thought: Lucious and Cookie decided to step down and make him the head of the company in the Season 3 finale. Andre tried to call off his and Shyne's plan to kill Lucious via car bomb, but it was too late. The bomb went off, and Lucious was left in a coma (and he had to get a prosthetic leg as well).

The Season 4 premiere proved that Lucious' amnesia wasn't a fake-out merely for the cliffhanger. No, this whole season will revolve around what becomes of Lucious now that his memory is gone. As executive producer Ilene Chaiken told Variety, the theme of the season is: "Who is Lucious now, and who will he become, and what has he lost? What is the family, but especially Cookie, doing in the face of the aftermath of Lucious’ injuries?" The premiere exemplified that, with the Lyons trying to adjust to Lucious' new personality, and Lucious — or Dwight, as he prefers to be called now — trying to grasp memories of his past and who he was.

Claudia, Lucious' nurse, is trying to help him through this process. From the start, Cookie doesn't trust Claudia. She even eavesdropped on a conversation between the two where Lucious asked to kiss her. Cookie confronted Claudia and told her she needed to get out of her house, but Claudia tried to explain that Lucious is interpreting his trust for her as desire. Claudia insisted that she's trying to lead Lucious back to his "ugly" memories, but Cookie isn't buying it. Honestly? I'm having trouble buying it myself.

Claudia seems pretty suspicious; her behavior with Lucious doesn't seem completely professional, from not denying his advances to wearing one of Anika's dresses to Empire's 20th anniversary party. There's definitely more to her than meets the eye.

At the party, Lucious went on stage and actually acted like his old self. He introduced the song "Love Me" and admitted that Cookie wrote it all those years ago, not him. Afterwards, though, he told Cookie that he still doesn't remember anything and was just doing what they practiced. He then called for Claudia to take him home. Demi Moore hinted that Claudia and Lucious will become more than nurse and patient, and Cookie can already tell. It seems that Claudia is almost leading Lucious away from his family, despite her claims that she's doing the opposite.

Does she want Lucious all to herself? Has she fallen in love with him in their months together? Something's not right here, and Cookie wants to sniff it out. Viewers know she won't go down without a fight. The last words of the premiere are her assuring Lucious, "You’re gonna remember me. I’m Cookie Lyon baby, I’m unforgettable." The tone for this season is set: Cookie is hellbent on getting Lucious back to his old self, whether Claudia will help or not.