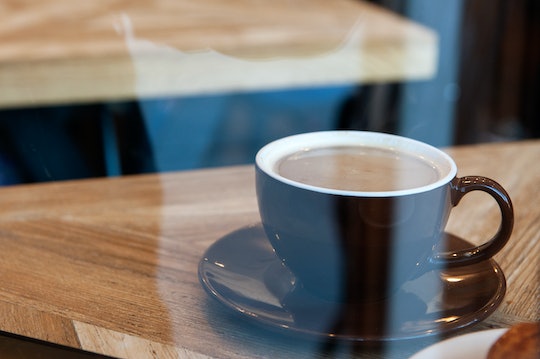 Coffee Might Be Able To Help With This Pesky Skin Condition, Claims A New Study

Coffee lovers, rejoice! There's another reason to reach for a second (or third) cup of your favorite brew. Yet another study proves that coffee can be good for you. So here's the question, can coffee cure more than the afternoon slump?

Doctors are now investigating coffee as a treatment for rosacea, according to a report by JAMA Dermatology.

Rosacea is a skin condition that causes redness of the face and, sometimes, raised bumps that look at bit like acne, according to WebMD. Often times it looks like a patient is permanently blushing or even sunburnt. Frequent bouts of rosacea can cause blood vessels to widen and eventually break. As they heal, they thicken and swell causing areas of your face to appear swollen and red, the site claims.

Aside from creams, there isn't much that could be done for a rosacea break out — until now. Here's where coffee comes into play. While rosacea causes blood vessels to widen, coffee may cause them to constrict. "Caffeine is a vasoconstrictor, meaning it makes the blood vessels more narrow. That may improve some of the redness in the face,” Dr. Brian Horvath of Horvath Dermotology, told CBS News.

To test the theory, Horvath and his team conducted a research project that studied the health and diet information of 80,000 nurses over 20 years, according to the same report.

“The researchers found that women who had four or more cups of coffee a day had about a 25 percent less chance of having rosacea than people that did not drink coffee,” Horvath said. While four or more cups may seem like a lot, Horvath says there's no harm in it.

“I think it’s absolutely OK to have a couple cups of coffee a day,” the doctor stated. Coffee also has antioxidants and anti-inflammatory properties — all things that can help with rosacea too, according to Health.com.

And one word of caution, while the coffee will help shrink blood vessels, the heat from the coffee may cause redness. Heat is a major trigger for rosacea, according to WebMD. So if you want to counteract this, go for a moderately warm cup or (even better, in my opinion) iced instead.

Coffee is a controversial medical treatment as it seems like new studies pop up every year and usually contradict one another, according to The New York Post. For instance, While some say coffee drinkers benefit from a daily dose of java, others say your daily cup is harmful.

So who should coffee drinkers believe? "What I tell patients is, if you like coffee, go ahead and drink as much as you want and can," Dr. Peter Martin, director of the Institute for Coffee Studies at Vanderbilt University said to The Atlantic. And, yes, you read that right — Institute for Coffee Studies. His only rule of thumb? If you have trouble sleeping at night, just cut out your last cup of the day.

Whether you order up lattes, cold brews, cappuccinos, or just plain coffee, think about how it could help your skin. You might just want to refill your cup. Your broken blood vessels will thank you.

More Like This
Yes, It’s Possible To Get Pregnant If You Have An IUD
Is It Good For Babies To Be Exposed To Germs? It’s Complicated
Pelvic Pain During Pregnancy: What Causes It & How To Deal With It
What Is Acid Reflux Tape? Chrissy Teigen Swears By It