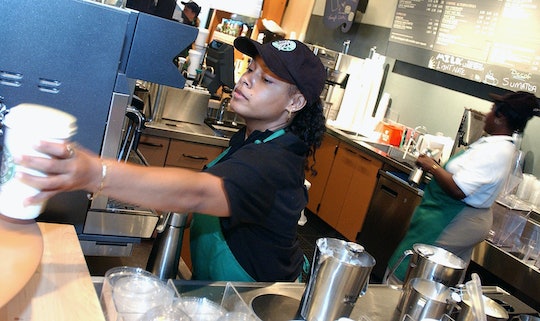 No, You Probably Don't Have To Worry About Getting Cancer From Your Starbucks Coffee

Caffeine-dependent Twitter users were freaking out over Friday's news of a California court ruling that seems to imply that Starbucks coffee causes cancer, but the good news is that a lot of people are grossly misunderstanding the headlines, without bothering to click through and learn the full story. Yes, a California judge did rule that Starbucks must warn its customers about a possible cancer risk from its coffee. This has some people saying they're going to switch to a different brand of coffee, or avoid all Starbucks stores in the Golden State. Sorry to burst your bubble, but that won't cut your risk.

Starbucks replied to Romper's request for comment, and referred to the National Coffee Association's statement, which reads as follows:

Today’s ruling in a long-standing legal case concerning coffee companies and California’s Prop. 65 has the potential for coffee to be labeled with “cancer warning” labels. The industry is currently considering all of its options, including potential appeals and further legal actions.

Cancer warning labels on coffee would be misleading. The US government’s own Dietary Guidelines state that coffee can be part of a healthy lifestyle. The World Health Organization (WHO) has said that coffee does not cause cancer. Study after study has provided evidence of the health benefits of drinking coffee, including longevity - coffee drinkers live longer.

“Coffee has been shown, over and over again, to be a healthy beverage. This lawsuit has made a mockery of Prop 65, has confused consumers, and does nothing to improve public health” said William (“Bill”) Murray, President & CEO, National Coffee Association.

It's not just Starbucks coffee that's affected by the court ruling; it's all coffee. And though some people are under the impression that only California coffee is carcinogenic, that's not correct, either. Coffee is the same in every state; it's the law that's different. Los Angeles Superior Court Judge Elihu Berle can only tell California coffee retailers what to do; his jurisdiction ends at the state line. But before you throw out all your coffee and switch to tea like you're the Queen of England or something, take a breath and learn the facts behind the decision, because you're probably not in nearly as much danger as you thought.

The ruling comes as a result of a lawsuit that was filed by a watchdog group called the Council for Education and Research on Toxics in 2010, according to Reuters. The accused 90 different coffee retailers of violating a California law that requires companies to warn consumers if their products contain a chemical that could cause cancer. When coffee is roasted, it produces acrylamide, a ~scary sounding toxin~ with too many consonants to not be cancerous. But the thing is, the dose makes the poison. The sun can cause cancer, but doctors aren't telling their patients to become mole people, now are they?

Acrylamide is present in lots of foods, according to the National Cancer Institute, including potatoes, crackers, bread, cookies, cereals, canned black olives, and prune juice. Studies have found an increased risk for some types of cancer in rodents that were exposed to acrylamide, but nobody has been able to link it to cancer in humans. Read this next bit carefully:

A large number of epidemiologic studies (both case-control and cohort studies) in humans have found no consistent evidence that dietary acrylamide exposure is associated with the risk of any type of cancer.

Chances are you've seen an alarming label on a seemingly innocuous product stating that it contains "a chemical known to the State of California to cause cancer or reproductive toxicity." This is because of a frustratingly vague law enacted in 1986, according to the American Cancer Society, which seems to scare more people than it helps. These labels don't don't include any information on what chemical the products contain, or how dangerous they may (or may not) actually be. Moreover, many chemicals on the list — acrylamide included — aren't considered to be carcinogenic by the scientific community at large; only the California government. The bottom line is that the National Cancer Institute, the American Cancer Society, and the U.S. Food and Drug Administration all say that a little acrylamide in your coffee is probably NBD, so go ahead and drink that caramel macchiato.