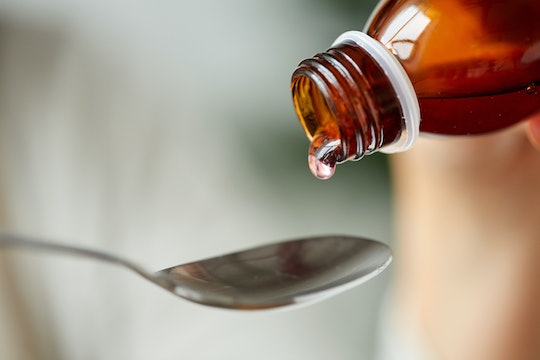 Can Cough Medicine Affect Trying To Conceive? Here's The Science Behind The Syrup

I'll admit that when I was trying to conceive, I went through roughly a bazillion Mucinex strips. (Not necessarily recommended.) I was told that if I took them, it would make my cervical fluid thinner and help me get pregnant. Is that true, though? Can cough medicine affect trying to conceive, or did I just gum the gluey strips for nothing?

Cough medicine, no matter how you take it, never tastes good. Having to take it over and over again in hopes that it will somehow medically thin the fluid from your cervix makes it no easier to swallow. You never get used to the fake grape flavor that ends up tasting more of regret than success — you just do it because you think you must.

But what's the science behind this? How does it work? According to the Journal of Experimental Lung Research, the active ingredient in some cough syrups, particularly Guiafex and Mucinex — guiafenesin — "improves mucociliary clearance in humans by reducing mucin release, by decreasing mucus viscoelasticity, and by increasing mucociliary transport." In other words, it makes your mucus faster, slipperier, and slimmer. It does not, however, increase the production of the mucus like many of the baby boards claim.

So, given all that, can cough medicine affect trying to conceive after all? Or is sex as slippery as it needs to be all on its own?

Strangely enough, a small study at Ohio Northern University showed that not only do women benefit from taking guiafenesin during their cycle (their tests used 200 milligrams three times daily from day five of her menstrual cycle until she ovulated), but the test also showed anecdotal evidence that it is beneficial for your partner to take it as well. Yeah, you read that right — you're both chugging the purple sludge. What does it do for your dude? The same thing it does for you, only for his sperm. It makes it speedier and slipperier, and gets it where it needs to go more efficiently.

Take all of this with a grain of salt though. The studies that have been completed are very small, and not particularly long in duration — they're barely more than anecdotes at this point. If you want to try it, talk to your OB-GYN and see what they say. (Make sure you don't have any reasons why you shouldn't take the drug to begin with.) If they tell you to go ahead, I suggest holding your nose and chasing it with a strong ginger ale. It helps, I promise. (Not necessarily with your cervical mucus, but it does kill the taste of cough medicine.)