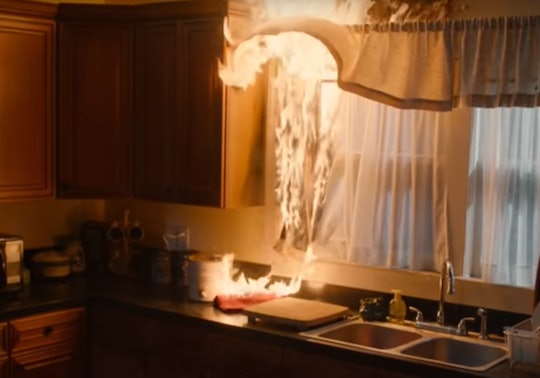 For the longest time, fans of the hit NBC show, This Is Us, have been wondering what actually caused Jack’s death. In the latest episode, the mystery around his death may have been laid to rest, unmasking the possible deadly culprit — a fire sparked by a slow cooker. This news has Crock-Pot owners worried, with some even vowing never to use one again. But before you give up on your favorite kitchen appliance, you should know — can Crock-Pots cause fires?

Keeping things in perspective, it’s important to note that in This Is Us, the fire is caused by an old slow cooker, with no brand name, that was known to have a defective switch. When the faulty switch turned on by itself, it caused an electrical short that sparked a flame in a towel laying near it. These circumstances, above all the faulty switch on the appliance, made the fire a plausible scenario. But if you have a perfectly working Crock-Pot, and you use it correctly, fire shouldn’t be too much of a concern.

In a phone interview with Romper, a customer service representative from Crock-Pot (the company) says it is safe to leave your slow cooker unattended for hours, as long as it is on a low heat setting. On the Frequently Asked Questions section of their website, Crock-Pot stated that their slow cookers are meant to be filled halfway to three quarters, and should be placed on a flat, hard surface away from any edges.

While Crock-Pot stands by the notion that leaving your slow cooker unattended for hours is safe, New York Fire Department representative Jim Long noted that while he has never seen a fire caused by a Crock-Pot, he has seen numerous hot plate and appliance related fires, so he erred on the side of caution when leaving any cooking appliance unattended, reported Fox News. Long further suggested that when you use an appliance like a slow cooker, you should make sure you are properly following the manufacturer’s instructions and directions.

When using your Crock-Pot, there are other aspects to check for to make sure it is safe enough to use, especially after watching This Is Us. Slow cooker expert and cookbook author Stephanie O’Dea told NBC News that if your Crock-Pot has a frayed or broken electrical cord, or is insulated in fabric instead of plastic, it can be a potential fire hazard. She noted that fabric cords don’t meet current fire safety standards, and when you have faulty, frayed, broken, or substandard wiring, keeping them plugged in for hours unattended is not a safe idea.

Many people have successfully used their Crock-Pots without burning the house down, myself included. I will admit that I am extra cautious when leaving it unattended, and I never leave my house with the Crock-Pot plugged in and running. But Crock-Pot insists that it is perfectly safe to leave your slow cooker unattended, as long as it is filled properly (so it doesn’t dry out or overcook your food) and it is on a low setting. When it comes to fire safety with your slow cooker, the key is making sure your appliance is working properly with wires intact and up to current safety codes.

With all this talk of fire, it’s also a good time to check your smoke alarms and fire extinguishers to make sure they are functional and up to date. If you have children, this also might be a good time to remind them of your household fire safety plan. If you don’t have a plan in place, take the time out to create one. Crock-Pot safety alone isn’t enough — making sure your home and family are alerted and prepared in case of a fire is the most important step you can take towards fire safety.