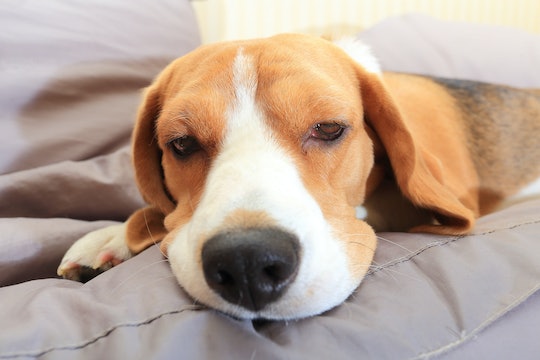 Fido Feeling Under The Weather? Here's How To Know If Your Dog Has A Cold

It's hard to watch our children suffer when they are sick, and the feelings can be similar when it's our canine kiddies who are under the weather. Doggie coughs, sneezes, and goopy eyes can cause concern. Your dog may also not be eating as much and just seem kind of sick. We know that in the winter the common cold can be enough to bring a normally healthy adult down for a week, but can dogs get colds, too?

Actually, yes dogs can get colds. Though they may not catch the same virus as humans, they are still a legit illness. Dr. Sara Joseph, a veterinarian in Massachusetts, tells Romper that dogs can catch respiratory infections from other dogs, and the illnesses can be bacterial and/or viral. Dr. Joseph says, "The most common ones are referred to broadly as kennel cough."

Kennel cough passes from dog to dog, usually through nose to nose contact, and is a bacterial infection. Its biggest symptom is, of course, a cough. The Dog Health Guide said that dogs can also get this from being exposed to the secretions of an infected dog at a kennel, vet's office, groomer, or training class. It's hard to know for sure if your dog has been exposed to this, but the incubation period for kennel cough is usually around two weeks, according to Dog Health Guide. At first it might just sound like your dog is clearing his throat, but as time goes on, he could get symptoms that more closely resemble a cold, like fever, lethargy, and in more extreme cases, vomiting. The American Kennel Club describes full on kennel cough as sounding like a honking goose.

Like colds in humans, most cases of kennel cough resolve themselves. However, Dog Health Guide suggested bringing the dog to a vet after 7 to 10 days if symptoms are not improving. If they are bringing up mucous and the color becomes closer to green than clear or yellow, or if their nose is bloody, you'll want to seek medical attention. It's possible the vet will give the dog a cough suppressant, which might make them more comfortable. If the vet is concerned about secondary infections, they may prescribe your dog an antibiotic, explained the site. Just like people, very young puppies, older dogs, and dogs with weakened immune systems are at the greatest risk of complications from catching a cold.

A cold isn't the only illness that can get your dog down. Dr. Joseph warns, "Canine distemper virus is a serious respiratory infection for which all dogs should be vaccinated. There are also outbreaks of Canine influenza for which there is also a vaccine." Vaccines can be a great preventative measure, especially if you have a very social dog or one who is often at doggie day care or staying in a kennel.

Because dogs can pass diseases to each other, it's helpful to try to isolate them if one seems sick. Canine influenza looks very similar to a cold: runny nose, persistent cough and even a fever. It is extremely contagious and according to the American Veterinary Medical Association (AVMA), almost all of the dogs who are exposed to the disease will get it. Cases can range from mild to severe, but most dogs will recover, with the AVMA putting the mortality rate at less than 10 percent.

Should you stay away from your pets when you are sick? It's always a good idea to wash your hands more frequently when you are sick. While colds don't typically pass from humans to dogs, there are diseases that do. These are called zoonoses. Dr. Carol Rubin, Associate Director for Zoonoses and One Health at the Centers for Disease Control and Prevention explained that there can be reverse zoonosis, where dogs get human infections. These can include MRSA, tuberculosis, and the flu.

The best thing you can do for your dog is to be attentive. If a cold or other illness seems like it's getting severe, seek medical attention. Unfortunately, like human colds, you may need to wait it out and know it'll get better on it's own. That's not easy to do, especially if your canine kiddie is suffering.

More Like This
22 Super Sweet Valentine's Day Poems For Kids
Galentine’s Quotes For Your Friends, Because Love Goes Beyond Romance
17 Fun & Interesting Facts About Valentine’s Day
35 Children’s Books Starring Black Characters
What Parents Are Talking About — Delivered Straight To Your Inbox