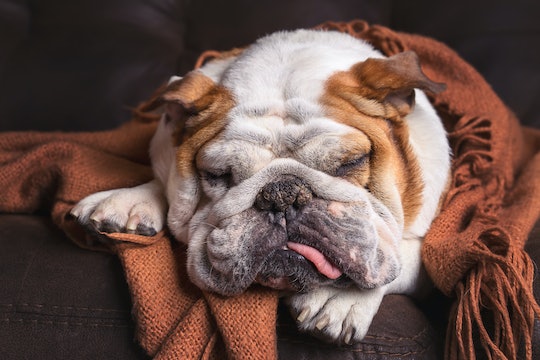 It's almost time for us to release our collective breath about our risk of catching the flu, but as the season doesn't officially end until May, we won't feel safe for a few more months. This flu season has been very scary for many people, especially parents, and dog parents are no different. If you've been washing your hands with extra fervor and keeping tabs on who in your circle of friends has gotten the flu shot, you might be wondering if dogs can get the flu and how that might affect you.

More Like This
If A Tick's Head Gets Stuck When You're Pulling It Out, Here's What To Do
Vaccinated People Can Ditch Masks. Where Does That Leave Kids?
What You Need To Know About Sunscreen For Your Baby
30 Quotes for National Brothers' Day

Unfortunately, dogs can get the flu and they can get the dog flu, so double whammy for the canine set. PetMd explained, "Bacteria, viruses, fungi, parasites, or other agents (prions, such as those that cause Mad Cow Disease) all have zoonotic potential, meaning they are capable of spreading between humans and animals, or vice versa." While it is rare for these to pass between species, it has happened, most notably with the case of Swine flu or H1N1, which passed from pigs to humans and then on to dogs, cats, and ferrets.

Meanwhile, dogs have their own types of flu that they can contract: "Canine Influenza Virus (CIV) and Canine Parainfluenza Virus (CPV) is contagious amongst dogs. The good news is that vaccines for both CIV and CPV are available," explained PetMD. Most dogs aren't given the vaccine for CIV because they're not at high risk for contracting it. Dogs who are kept in boarding kennels, attending doggy daycare, or frequently visit dog parks should get vaccinated for it though, because they are at higher risk of being exposed to it.

However, the The American Veterinary Medicine Association (AVMA) warned, "Because this is still an emerging disease and dogs in the [United States] have not been exposed to it before, almost all dogs, regardless of breed or age, lack immunity to it and are susceptible to infection if exposed to the active virus."

So how do you know if your dog has the flu? The symptoms for both humans and animals who have the flu are similar, making it at least a little easier to recognize. Signs that your dog has the flu include "cough, runny nose, fever, lethargy, eye discharge, and reduced appetite, but not all dogs will show signs of illness," explained the Centers for Disease Control and Prevention.

Dr. Amy Glaser, director of Cornell's Molecular Diagnostics Animal Health Diagnostic Center, told ABC News that "most dogs will recover without any treatment beyond good nutrition and rest," from dog flu, but some dogs might need medication to treat fever or a persistent cough, or could even need fluids to help with dehydration.

AVMA reassured dog owners that most cases of dog flu don't result in dog death. "Fatal cases of pneumonia resulting from infection with canine influenza virus have been reported in dogs, but the fatality rate is low (less than 10%). Most dogs recover in 2-3 weeks."

The preventative measures for keeping dogs from getting the flu are the same as with humans. Keeping dogs as clean as possible and limiting their time with packs of other dogs at the park during flu season can help prevent them from contracting the flu. Dogs spread the flu just like humans do, with coughing or sneezing, so "Dogs that spend time in places like kennels, dog parks and boarding centers are the most at risk for catching the flu," according to ABC News.

Luckily, there haven't been any cases of dogs transferring canine flu to humans, so while you'll want to keep your dog clean to protect it from contracting the virus, you shouldn't have to worry about catching it yourself.