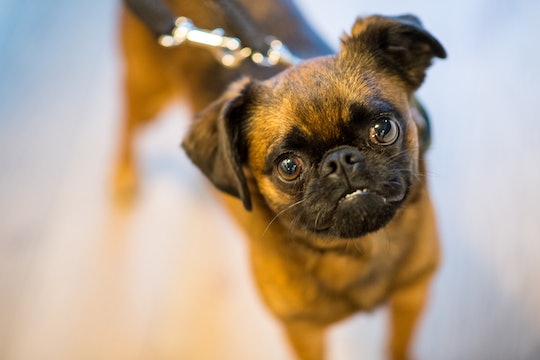 No Seriously, Your Dogs Can Pretty Much Figure Out If Your Baby Is On The Way

Do you ever wonder if your dog has preternatural abilities that you just don't understand? I know I do. My dog always knows when I need a friend, or if I'm in a hurry and need her to do her business quickly on our walks. I have heard that dogs can tell when their owner is sick, and some that can predict an oncoming seizure. They're amazing, right? But when you're pregnant, what is it that can your canine companion decipher? Can they tell when you get pregnant? Can dogs tell if your baby is coming? It makes you wonder what cues they're picking up on, and how they read them.

According to research, dogs can sense a lot more than you might think. Because of their innate sense of smell, sound, and the way they get to know their owners, dogs frequently predict oncoming health issues in their human companions, noted The Journal of Nursing Scholarship. It's why children and adults with epilepsy can so readily rely on their service dogs to help them get to safety before a seizure. There are even dogs who can reportedly sniff out cancer. And strangely enough, many researchers believe dogs can sense when a woman is about to go into labor and other, similar physical issues, according to Carnegie Mellon University.

With my oldest, I am fairly certain my Akita knew what was up. She followed me around the whole evening on the Saturday night before I went into labor. My Rottweiler, on the other hand, was really, really not-so-smart, so I don't think he picked up on my impending childbirth. He was a sweetheart, and became my son's best friend, but he wasn't gifted intellectually; he ran into walls with some regularity.

I spoke to some of my fellow dog-loving mom friends to see if any of their dogs acted differently in the hours and days before their babies made an appearance, and it was a mixed bag. One sort of interesting thing I found during my very unscientific analysis of my friends' responses is that their female dogs tended to react more strongly to their upcoming labor than their male dogs. Talk about a woman's intuition, right? It makes sense, though, if you think about dogs in the wild. According to PLoS One, female alpha wolves are extremely protective of every other female dog in the pack, especially when they're with young. In a house, you are their pack, and they might have some of those instincts somewhere in the wild parts of their mind.

So, can dogs tell if your baby is coming, even if you can't? I asked veterinary technician and mom, Heather Baldwin, of Akron, Ohio, and she tells Romper simply, "Probably." Much like a seizure, which dogs can detect before the human even knows it's going to hit, Baldwin says that labor brings huge changes to your body that likely alter your scent, respiration, and even the way you move, even though you might not be aware of it. "Dogs' sense of smell is highly acute and they know their masters' scents better than anyone's. If there's even a slight change, they'll pick up on it, and might start acting strangely."

And let's be honest, your dog has stuck their nose in your crotch more than you care to admit. If things were say, opening or even leaking a little? They'd be the first to know. During the end of my pregnancy, my dog got really clingy, and boy, she really dialed that up a good amount in the night before my son was born. Dogs are so incredible and maybe a bit psychic if you ask me. So, if you're expecting a new addition soon, and your dog starts sticking to you like glue out of nowhere, maybe pack that hospital bag you've been procrastinating on putting together. Your little one could be coming sooner than you thought.

More Like This
A C-Section Actually Doesn't Take As Long As You Think, According To Experts
24 Beautiful Baby Names With The Same Vibe As Mila
The Ultimate Baby Registry Checklist
All Your Questions About Getting Pregnant After A Tummy Tuck Answered