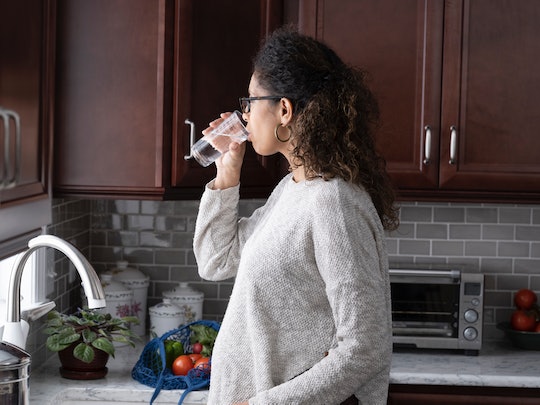 When you first begin feeling your baby’s movements inside you, it’s truly amazing and you begin looking forward to more and more movement every day. There are even some things you can do to make your baby’s movements feel more pronounced, like relaxing in a quiet setting. But there are some moms who swear by drinking really cold water as the best way to get that baby moving. Whether you just want to feel more kicks or are worried your baby is too quiet in there, you're probably wondering, "Can drinking cold water make my baby move?"

Some women feel their baby move a little more after drinking cold drinks, but not all women, and not all the time, according to a 2013 study by BMC Pregnancy and Childbirth. So while drinking a cold glass of water might seem like it’s stimulating your baby, it’s not a fully researched fool-proof method, and there’s no evidence-based science to back up this approach.

Consuming ice-cold food or beverages is unlikely to increase fetal movement, as it will be rapidly heated to body temperature as it moves from out of your esophagus and stomach into your bowels, Dr. Adrienne D. Zertuche, OB-GYN at Taylor, Suarez, Cook, Carroll, and Adams (Division of Atlanta Women's Healthcare Specialists), tells Romper. She says a method more likely to increase fetal movement is the consumption of sugar, like soda, juice, fruit, or candy.

It's important to gauge why you're trying to make your baby move in the first place. Your doctor may ask you to keep track of “kick counts”, especially in the third trimester, which The Bump described as your baby’s patterns of movement, including kicks, rolls, swishes, or jabs. Keeping track of any decreases or changes in movement can prevent stillbirth and other complications. A 2019 study showed that 10 distinct movements in a two to three hour period is considered reassuring and “normal,” though every pregnancy is different and your doctor can best advise on your specific situation. The same study showed that the simple act of counting kicks can help improve maternal-child bond,

Because the science is still out on whether cold drinks initiate fetal movement and some patients find that it works, many doctors do use this approach. Dr. Kathryn Wright, OB-GYN at Facey Medical Group, tells Romper that when she wants a patient to do kick counts, she usually suggests that they drink something cold and sugary, like orange juice. But, “if she has diabetes,” says Wright, “then I recommend ice water.” She adds that moms should then lie on their left side and concentrate on the baby's movements.

Some women find that their babies sleep after they eat, so they might want to do their kick counts before eating, Wright explains. She says others might find the opposite, so each woman should follow her baby's own behavior patterns. “There are no specific foods that work better than others,” adds Wright, “but high carbohydrate foods will raise one's blood sugar, and therefore the baby's blood sugar, faster than other foods.”

If, for any reason, you are concerned that your baby is moving less than normal, especially if you cannot count 10 movements in the hour following a sugary snack, you should call your obstetrician, Zertuche explains. Using drinks and foods as a way to get your baby moving should only be an option if you know your baby is okay, which will require the evaluation of a doctor and ultrasound. If your baby is doing well, then drinking ice water in the hopes of getting a few more kicks shouldn’t hurt. If it works for you, then enjoy that connection, and make sure to count those sweet movements.

More Like This
Turns Out, You Can Dilate Pretty Far Before You Actually Go Into Labor
Can You Bowl While Pregnant? Experts Weigh In
What You Need To Know About Bed Rest & Oral Sex
Can Swimming Induce Labor? Experts Weigh In

This article was originally published on Oct. 17, 2017