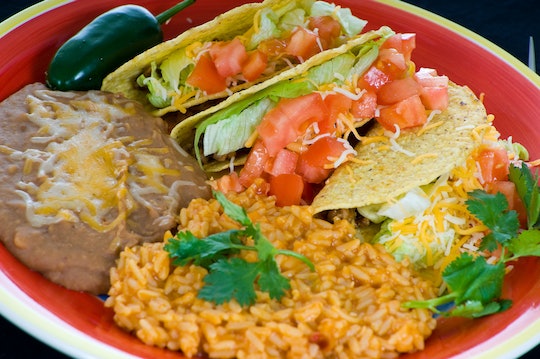 As a woman who's been through the long drag of pregnancy a few times, I will tell you that towards the end, there is nothing more in this world you want than for it to be over. Your ankles are swollen, your sciatic nerve is sending lightning strikes through your right butt cheek, and there is no such thing as a comfortable sleeping position. At this point, you've probably heard and tried several induction remedies, and nothing worked. Next up is spicy food, like your beloved Chipotle. But can eating Mexican food induce labor or will your carnitas addiction just lead to heartburn and an even worse night's sleep?

An article that appeared in May 2017 in The Boston Herald described how several women in the region swear that specific spicy tacos from a local Mexican restaurant brought on their labor. While anecdotal stories such as these are fun to read, and even more fun to try out, there isn't any science behind the old wives' tales. The only truly natural way to induce labor that's been rigorously studied and determined to be effective is prolonged, intensely active stimulation of the nipples. Other than that, it's just a lot of fun and even more superstition.

When I was pregnant with my oldest, I did everything I'd ever heard about to induce labor. I went for extremely long walks — in the middle of winter, mind you — to get him to move deeper into my pelvis, and I ate nothing but spicy food. My favorites were Chipotle, grilled cheese with habanero peppers, shrimp chow fun with more Sriracha than noodles, and chili so hot it would melt the paint off a Cadillac. I don't think they worked at all. If anything, it just gave my child an inordinate love of all things spicy. That boy is a total chili head who asked if he could have a small jar of hot sauce for school. I can only blame myself.

The hypothesis for Mexican and other spicy cuisines bringing on labor surrounds the idea that the happy hormones that are released when the pain kicks in will jolt your body into action. Alas, this is not the case. The hormone responsible for labor — oxytocin — and the hormone released when spicy foods are eaten — dopamine — do not serve the same functions in the body, even if the end result feels similarly, noted Northwestern University. That's not to say you shouldn't try a dish at local restaurant that's been known to bring on labor though. There's a lot of power in suggestion. We wouldn't have placebo studies without it, and who cares if the effect is from your mind or your uterus as long as that baby comes, right? Of course right.

The thing that I think finally worked for me was Murphy's Law. You see, there was a camellia show at an arboretum about 15 miles from my home I was desperate to see. It's supposed to be absolutely gorgeous. My husband and I made plans to go to this festival one Sunday morning after we spent the entire day on Saturday walking the aisles of an enormous upstate New York mall. That Sunday morning, I woke up feeling kind of crampy. Well, that crampy feeling went from zero to 100 in an hour, and I was in full-blown labor. We had to rush to get to the hospital, and I never did get to see the camellias. Murphy's Law, am I right?

Can eating Mexican food induce labor if you really wanted to eat it and make plans to do so, invariably invoking Murphy's Law? I'm inclined to believe it. Although, if you're just looking for quick take-away dinner that might spur things along, rumor has it that shrimp quesadillas are the way to go for labor induction.

More Like This
31 Sweet & Savory Apple Recipes To Make This Fall
These Oktoberfest Instagram Captions Will Get Likes & Prosts
Eden Grinshpan On Getting Your Kids To Love Fish Eyeballs (Yes, Really!)
Are Boy Babies Usually Late? Signs Your Baby May Be Born Late