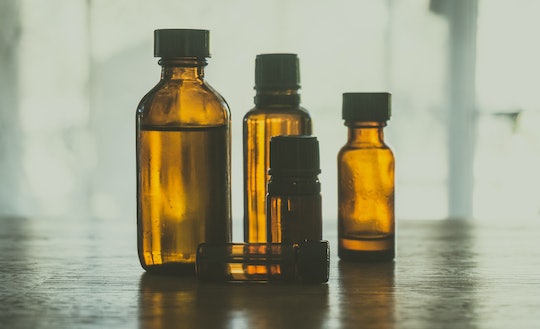 How Essential Oils Can Actually Treat Morning Sickness, According To Experts

When I was pregnant, I had a type of morning sickness called hyperemesis gravidarum. That is, I was sick every minute of the day from day one until I delivered, and I tried everything — including aromatherapy, also known as essential oil therapy. I'll admit, I'm a skeptic, but can essential oils actually treat morning sickness? Seems easier than scarfing ginger down with every meal, right?

More Like This
Can You Go Down A Water Slide If You're Pregnant?
Let’s Bust All The Myths About The COVID Vaccine & Fertility
Lightning Crotch Can Actually Tell You These 7 Things About Your Pregnancy
Your Guide To Hiking During Pregnancy

My Facebook and Instagram feeds are full of people who are selling oils faster than the last pair of Pradas at a sample sale. Are they all that they're made out to be, or are they the 21st century equivalent of snake oil? I've seen sellers claim that they're good for everything from preventing the common cold, to, and I'm not kidding about this, curing diabetes. Curing means completely resolving the problem so that it no longer exists. It's one of those "I do not think it means what they think it means" situations.

Claims like these are dangerous, no doubt, but that doesn't mean that some of them aren't without merit. For one, the Centers for Disease Control and Prevention (CDC) recently came out with a study which stated that lemon-eucalyptus oil can be as effective as commercially produced insect repellants in the fight against mosquitoes and ticks. Another study showed that lavender oil used as aromatherapy (read: not on the skin) was an effective agent as a sleep aid, confirming the claims of the sellers of lavender oil. I know this, because any time I mention my use of Ambien, I get eleventy million recipes for lavender oil and my diffuser. Maybe eleventy billion. It's a lot.

To be fair, if the lavender worked for me, that would be great, because I have a tendency to order weird crap after I take my Ambien, and no one (or everyone) needs an entire bathroom set of space cat themed merch.

Honestly, though, I aromatherapied (new word I just coined because I'm basically Shakespeare) the heck out of myself when I was pregnant. There was a diffuser in every room, and I like to believe it helped — at least a little — but was it safe? Was it truly effective? Can essential oils actually treat morning sickness?

I spoke with Dr. Amy Peters, OB-GYN, Saddleback Memorial Medical Center, Laguna Hills, California, and she tells Romper in an email, "As for essential oils, I have used them casually and been happy with the results. Morning sickness is not cured with a single bullet across the board, so if a patient would like to try it and it helps, then no harm done. I don't know of any evidence/controlled studies analyzing the effectiveness, but the power of suggestion is real, which is why there is a placebo effect. In short, I would say it is worth trying essential oils if a patient wants to. It may or may not help as with the prescription drugs that are available."

The physicians at Westchester Health, specifically, Tiffany Werbin-Silver, MD, FACOG, also wrote about aromatherapy as a treatment for morning sickness, suggesting the use of lavender, lemon, mint or orange oil applied to a handkerchief, and breathed in occasionally to relieve the effects of queasiness. Note that no doctor prescribed the application of essential oils directly to the skin. That is because there are serious dangers associated with essential oils, notwithstanding their effects on a pregnancy, and doctors are especially concerned with pregnant patients' use of complementary medicine because it's often done without the knowledge of an OB-GYN. Many assume that if it's natural, it must be safe, and that's not always the case.

There are more and more studies being completed about the use of essential oils to treat common ailments such as the nausea associated with morning sickness, because the demand for these studies is at an all-time high. A recent study published in European Review for Medical and Pharmacological Sciences looked at the efficacy of ginger extract, which is generally thought to be safe for consumption during pregnancy, in the treatment of nausea and vomiting. The results were encouraging. It showed that not only can ginger extract be an effective treatment for nausea, it doesn't carry with it some of the teratogenic risks of other treatments.

While the data is encouraging, it is important to note that many oils are deemed unsafe for pregnancy, and each oil you use should be discussed with your provider — especially if you're using it as a tincture or consuming it in any manner. Also, it's important that your diffusers are kept very clean, and allowed to dry out between uses to prevent the build up of toxic mold inside the diffuser, noted the University of Minnesota. The American College of Healthcare Sciences even wrote that it's of extreme importance that the oils which you choose to use are of the highest possible quality. You need to be able to find out easily where it was grown, how it was grown, what it's distilled with, and any additional ingredients that the producer is using.

It cannot be stressed enough that any oils used should be deemed as OK by your doctor before you begin using them. It's tempting to pass oils off as nothing more than ingredients for lotion, but they are intensely condensed versions of those fragrances, and their therapeutic benefits must be measured before use. Hopefully, though, you find some relief from the hell that is morning sickness.