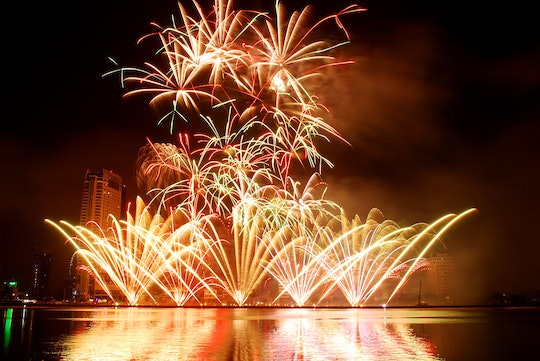 Can Fireworks Hurt Your Baby's Ears?

I'm deaf and my daughter is hard of hearing. This means that what little hearing we have, we want to protect at all costs. With the 4th of July just around the corner, you may be concerned about hearing safety as well. If you're wondering, "can fireworks hurt my baby's ears?" you're not alone.

Hearing is a tricky, tricky beast. For instance, my hearing loss is two-fold, both conductive and sensorineural. This means that not only was I prone to have a level of hearing loss from birth because the bones in my inner ear are perforated and therefore do not conduct properly, I also have hearing loss due to damage to the cochlear nerve from repeat infection and sound exposure.

The latter, sensorineural, noise-induced hearing loss, is what occurs to rock stars and road workers. It's due to repeated exposure of sounds above 85 decibels, or a "boom" exposure typically over 140 decibels, according to The National Institute of Deafness and Other Communication Disorders. The effects of sound exposure can be cumulative or due to a single event — like fireworks. The sound damages the tiny hairs of the outer ear, which direct the current of sound toward the conductive, inner part of the ear.

Generally, according to Boys Town National Research Hospital, fireworks register at over 140 decibels of sound. For an adult, you'd need to be about 65 feet away from the fireworks to be considered safe. For a child, it's more than double that. However, it's different with babies.

For adults and even children older than 6 months old, there are decent methods and gear out there that you can employ to protect their hearing. Anyone who's ever been to a rock concert or watched a football game on television has seen the players' babies rocking the earmuffs.

Can fireworks hurt your baby's ears? Absolutely, because, for babies under 6 months old, there is no such equipment that is built to specifically protect them. Even baby earplugs are no guarantee, because it's difficult to tell if they're fitting properly, and you're likely to not check them as often as you should. That's why the Women's and Children's Health Network suggested that you limit baby's exposure and try using protective headphones. It's also safest to keep you and your baby as far from the fireworks as you can while still enjoying the view, according to the National Institutes of Health. And remember, just because you can't hear the boom, doesn't make them any less enjoyable. In fact, it will probably make them more enjoyable. (My son was terrified of fireworks.)

I'm deaf, and I still love fireworks. Not hearing them doesn't detract from their enjoyment at all. I mean, there's still beer being served, right? (For you, not your baby.)

More Like This
Abbot's Formula-Producing Plant Can Reopen In As Early As 2 Weeks — Now What?
Can You Help Your Baby’s Hair Grow?
Here’s What You Need To Know About That Viral 1960s Baby Formula “Recipe”
These 4 Sleeping Positions Will Keep You Comfortable After A C-Section