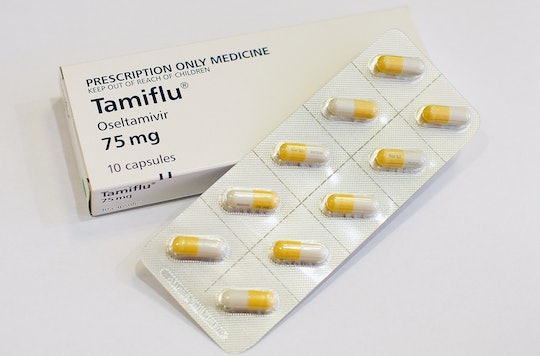 Right now, there are few things more prominent in the forefront of the American psyche than the flu. It eclipses all of the Kardashians, the Oscars, and if not for the short-lived government shutdown, it would shove even Trump aside as the number one story on every newscast — and with good reason. This year, it's a virulent strain that kills quickly and terrifies many, especially those who are pregnant or want to become pregnant. Will it affect pregnancy? Ability to conceive? If you get sick, can flu medicine affect ovulation?

There is currently a dearth of any published studies that examine the effects of drugs like Tamiflu and other antivirals used to treat influenza on TTC or the menstrual cycle. However, based on years of longitudinal research and historical data, it can be inferred that the prolonged illness that these antivirals seek to combat is a greater threat to a woman's fertility than the drugs themselves, according to a 2012 Danish Study that examined years of pandemic flu and the birth and fecundity rates of populations impacted by the flu. There is some research that a popular antiviral may have a negative effect on male fertility based on a study in rats, but there are also studies showing that allowing a virus to live in the system without treatment has an even greater impact than the drugs.

The flu can absolutely ravage your system, according to the Centers for Disease Control and Prevention (CDC), especially if you're a part of a vulnerable population like someone living with asthma, a heart defect, or autoimmune disease. The current CDC recommendation for women who are pregnant or TTC is that they receive antiviral medication as soon as possible to begin treatment for the potentially deadly flu virus.

"Antiviral treatment should be initiated as early as possible because studies show that treatment initiated early (i.e., within 48 hours of illness onset) is more likely to provide benefit. However, some studies of hospitalized patients with influenza, including an analysis of hospitalized pregnant women, have suggested benefit of antiviral treatment even when treatment was started more than 48 hours after illness onset," the CDC noted on their website.

The CDC typically treats pregnant women and women actively trying to become pregnant very similarly, as proven by their strict recommendations regarding the use of alcohol during TTC and pregnancy. Therefore, it stands to reason that their recommendations for one would apply to the other. They don't do much differentiating between possible early pregnancy and confirmed pregnancy when determining treatment, other than to recommend rapid testing for pregnancy upon diagnosis because of the physiological changes associated with pregnancy that change the possible trajectory of the disease.

That's not to say it can't disrupt your cycle, just that science isn't sure or it hasn't studied it thoroughly. So, how does taking medicine for the flu affect TTC? Alan Copperman, M.D., director of reproductive endocrinology at the Icahn School of Medicine at Mount Sinai in New York City told Parents magazine, "Because a woman's menstrual cycle is tightly controlled by the interaction between the brain, ovaries, and uterus, any health problem or medication that disrupts this communication could adversely affect ovulation and make it challenging for women to achieve a pregnancy."

However, you're not going to be on these drugs for an extended period of time. Tamiflu, the drug currently recommended by the CDC for pregnant women, is only given for five days. It's not like some antibiotics which are taken for up to two weeks, or possibly indefinitely for prophylactic purposes. The treatment for flu is finite, as is the disease, thankfully. In this case, it's better to worry about shortening the virus than it is to worry about a shift in your fertility, if only for one cycle, however difficult that might seem to be.

Beyond your own fertility, you might not even be able to try to get pregnant that month because you're sick and your partner is not. Or, alternatively, you might still feel worn down and just not into it, and that's OK. Heal, rest, and worry about it next month when you're feeling healthier and sexier. Because no amount of self-talk will make coughing up a lung feel sexy.