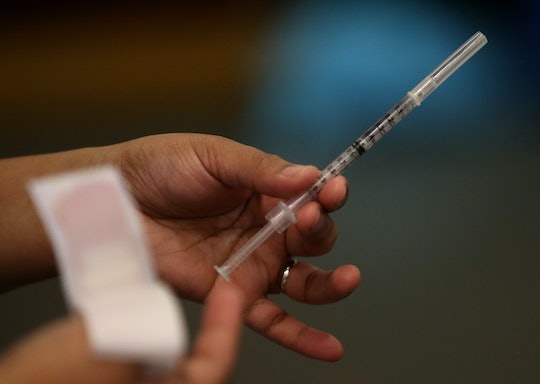 Can Flu Shots Wear Off?

Getting vaccinated before the fall may no longer be the most responsible thing to do. A recent CDC study sought to answer the perplexing question: Can flu shots wear off? Though much more research needs to be done before any definitive statement is made, the aforementioned study found a trend of "decreasing influenza vaccine protection with increasing time since vaccination."

Slowly declining by about 7 percent in effectiveness each month, the study observed an increasing risk in contracting the flu in the subsequent months following a flu shot. Again, though many studies have found similar trends that support these findings, the CDC's study noted that "bias or residual confounding could explain these findings," which basically means that flawed experimental design could discredit the conclusion.

Whereas earlier flu shots typically translate to more people being covered — an obvious benefit — summer flu shots, however, could become altogether ineffective and, therefore, useless. Summer notwithstanding, doctors still vary on when to get a flu shot, because "the data are very mixed," reminds John J. Treanor, a vaccine expert at the University of Rochester medical school. Some, like immunologist at the University of Connecticut Center on Aging Laura Haynes, promote that viewpoint that the ideal time to get a flu shot is "between Halloween and Thanksgiving." Still, Haynes concedes: “If you can’t wait and the only chance is to get it in September, then go ahead and get it. It’s best to get it early rather than not at all."

Muddling the recommendations a bit, Treanor also notes that some research suggests that "you still have protection from the shot you got last year if it's a year when the strains didn't change." It seems that there's still much to be learned, studied, and clarified in regards to flu shot effectiveness over time.

Still, if you're wondering if mid-January is too belated a time to get vaccinated, it's still definitely not too late to get a flu shot in preparation for the peak of flu season. "With many months to go on the current flu season, if one has not yet received a flu vaccine, they should absolutely should get one," Marc Leavey, M.D., an internist at Baltimore's Mercy Medical Center, told SELF on Wednesday. It's also important to not wait around any longer, because flu shots take some time to work: "It takes about two weeks after vaccination for antibodies to develop in the body and provide protection," the U.S. Department of Health and Human Services explained.

Whereas August or September aren't the ideal times to get a flu shot, they're better than not getting a shot at all. If, on the other hand, you've waited until the new year to get covered, though, time is of the essence. Last year's flu season ended in March, so there's still a ways to go.