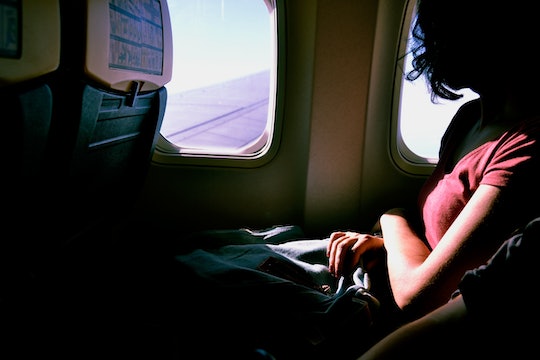 When it comes to air travel, there are unspoken rules — especially when you have kids. Hi, man in row 23. I feel your stare. Flying etiquette looks different for everyone — some people say live and let live, while others start huffing and puffing the moment someone’s arm hair brushes theirs. But what about when you are newly pregnant? Navigating the early weeks of pregnancy comes with a lot of questions, let alone doing it while aboard the friendly skies. Like, can flying during the first trimester cause a miscarriage?

“Travel during the first trimester is safe, but women should be aware that the overall risk of miscarriage is greatest during the first trimester, so if she happens to miscarry, she may blame it on air travel,” Dr. Rebecca C. Brightman, a NYC-based OB-GYN and assistant clinical professor at the Icahn School of Medicine at Mount Sinai, tells Romper in an email interview.

Dr. Salli Tazuke, the co-founder and co-medical director of Colorado Center for Reproductive Medicine in San Francisco explains the roots of the concern, pointing at speculation over whether or not flying can cause miscarriage due to lower oxygen tension or exposure to atmospheric radiation. But she says, while there is some limited observation that flight attendants have slightly higher miscarriage rates, this has not been confirmed.

“If your pregnancy is straightforward, then flying is not thought to be harmful for you or your baby,” she says.

Tazuke says there are a few precautions pregnant women should take when flying, however, including hydrating properly (dehydration can cause cramping) and moving around on the plane to avoid deep vein thrombosis.

Once a heartbeat is seen on ultrasound at about six or seven weeks, Brightman says “the risk of miscarriage does decline significantly, making travel less anxiety provoking.” She does caution, however, that women who are considered a high-risk for miscarriage or who have had a history of miscarriage, may want to put off first trimester travel plans until they receive the "go ahead" from their healthcare provider.

Now when it comes to the last month of pregnancy, it's a different story, says Dr. Allison Hill, OB-GYN and co-author of The Mommy Docs’ Ultimate Guide to Pregnancy and Birth.

"Most airlines won’t let you travel in the last month of pregnancy, but that’s just because they don’t want people going into labor on the airplane," she says. "Being at altitude in a pressurized cabin is not dangerous in itself."

Of course, if you are flying with me, then the rules are simple — I get the window seat.