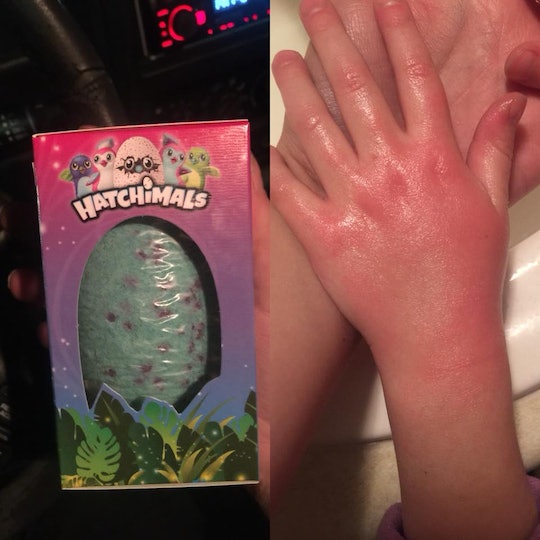 This Mom's Warning About The Hatchimals Bath Bomb Is Scary AF

If you kid is obsessed with anything and everything Hatchimals-related, then you will want to know about a potential warning circulating the internet, specifically regarding the bath bomb product. In general, can a Hatchimals product cause chemical burns in children, or is one viral cautionary tale not enough reason to sound the alarm? Figuring out the truth behind this warning may take time and research.

According to a now-viral Facebook post, a child experienced chemical burns after taking a bath with a Hatchimals bath bomb. As the post further explained, the child's reaction was confirmed as a chemical burn by a doctor, and she had not experienced any reaction from other branded bath bombs before. Information about the particular batch of bath products is provided in a photo, and the mother who posted about the product suspects this particular batch will soon be subject to recall as there have been other complaints made.

At this time, it appears the Facebook post and its pictorial evidence of the burn is the only source of evidence for the story. More information is needed to determine the exact cause of this child's reaction, and the likelihood of other children experiencing a similar burn. It does not appear that the Hatchimals bath bombs have been officially been recalled at this time, and the parent company, Spin Master, has not released an official statement about the product either way.

In addition, it does not appear that any outside source has either confirmed or denied the story behind the Hatchimals warning post. According to Snopes, the Hatchimals bath bomb chemical burns post is unproven at this time, because of the lack of additional information about the story. It looks like parents and curious bystanders alike will have to wait for more information to become available.

As it turns out, some bath bombs contain ingredients that act as common skin irritants. For instance, limonene and linalool are ingredients sometimes found in bath bombs. Used for their fragrance properties, oxidized limonene and linalool are known to cause significant contact allergy rates, according to a 2014 study in the British Journal of Dermatology. As the study further explained, some individuals who touch oxidized limonene or linalool will get contact dermatitis, or a red, itchy rash on the body, according to the Mayo Clinic. (When a person develops a rash after touching poison ivy, for instance, this is also an example of contact dermatitis.) Although more information is needed to form a direct correlation, it's plausible that individuals with sensitive skin who contact irritating ingredients in a bath bomb would experience a rash or other type of allergic reaction. Disclaimer: neither of these are listed as ingredients that make up the Hatchimals bath bomb.

As everyone waits for more information about this story to develop, how can parents ensure bath time is safe? To safely use bath bombs, read up on the ingredients and opt for natural ones whenever possible, according to Bustle. In general, food-grade colors or non-synthetic fragrances are a good bet. But remember that it is possible to experience an allergy to just about anything, even the most natural substances available. (Poison ivy leaves are natural, for instance, but nobody wants that stuff in a bath bomb. Yikes.)

Oh, and if your kid is absolutely obsessed with the Hatchimals bath bombs, you can still enjoy them while erring on the side of caution. Just drop the bath bomb in a sink or a clear glass bowl, so your little one can enjoy the sights, sounds, and scents safely. You still get the toy charm inside either way, and that's really the important part.