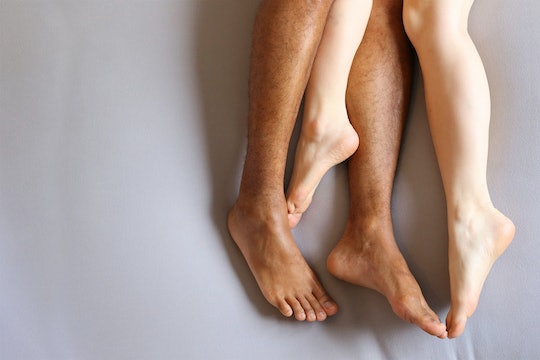 You Should Have All The Sex When TTC

When I was trying to conceive, I googled every old wives' tale. I knew every tip there was to getting pregnant. Pillow propping, fancy lube, tea that tasted like tree bark, even dirty talk was used. And I wondered, can having sex too often affect the chances of getting pregnant? Or is it like the Florence+The Machine song, "Too Much is Never Enough?"

Within the past few years, significant studies like one on the immune aspects of female infertility in The Journal of Fertility and Sterility have been written about this subject. When I was trying to conceive, all of the baby-making boards were suggesting having sex every other day, lest the man's virility be over-taxed. But these new studies contradict those old wives' tales, and place less-emphasis on the virility of the male, and more on the reception of the female. (Because I need more reasons to blame myself for something.)

Is there a magic amount of boot-knocking to get knocked-up? Can having sex too often affect the chances of getting pregnant? An Indiana University study looked at sexual frequency and fertility in a longitudinal study over a period of years to answer this question.

They determined that women who are trying to conceive should have sex. Lots of it. All the time. Chief researcher Tierney Lorenz, PhD is the first researcher to possibly determine why it is that having sex during most or all phases of the menstrual cycle improves a woman's ability to conceive.

How does it work? Have you ever told your partner "you make me sick?" You were probably referring to the way they inhale chicken wings (it's a wonder I'm still married), but apparently, you were also being scientifically accurate. Your partner does make you sick — sort of. This study suggested that something occurs during repeated sexual interactions that triggers changes in the woman's immune system that makes the body less hostile to your partner's foreign invaders.

Why is this important? Consider your immune system. It is designed to attack anything foreign that enters the body. When your t-cells are activated, they provoke an immune response, according to The University of Washington. Those cells hit up their macrophage buddies and release interferon-gamma, and this cytokine increases the efficacy of handy-dandy organelles to basically eat the foreign cells.

But if your body attacks the sperm — how will you get pregnant?

Lorenz's study showed that in women who have frequent sexual intercourse, the hormones like progesterone and estradiol cause the body to enter a "pregnancy like state" in an endocrine-immune cycle at higher rates than abstinent women. Not only that, Lorenz stated that increased sexual activity lowers the level of secretory immunoglobulin-a, which is a crazy important antibody in your immune system's first responder team, according to the Journal of Future Microbiology.

And if that wasn't enough, all of that sheet time decreases inflammation, which is known to inhibit conception, according to an article in Infectious Diseases in Obstetrics and Gynecology.

So it looks like science basically says that too much sex may be just the ticket to getting pregnant. Although, if you're exhausted, no one is forcing you to show your partner this article. You can pretend it never happened. (But show all of your friends.)