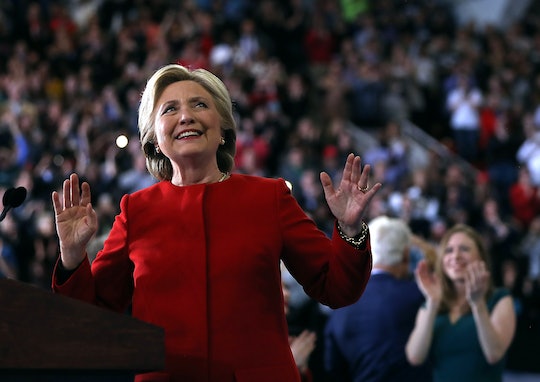 Can Hillary Clinton Win If She Loses Pennsylvania? America Is Holding Its Breath

As election night continues on into the later evening hours, Donald Trump's lead in the presidential race continues to rise, and many are wondering if there's anything that could shake it. With some of the "big-player" states still left to report in, many are wondering what it might take for Hillary Clinton to pull out a win. Can Hillary Clinton win if she loses Pennsylvania, for instance? With 20 electoral votes, it could help her get ahead, but it may not be enough to put her in the lead.

In any election year, when it comes down to the wire, the focus is often on the "swing states". These "battleground states" can drastically change the direction the election results appear to be going in, and if a candidate has fallen behind they are clung to as a last hope. States like New Hampshire, Colorado, Iowa, North Carolina, and Pennsylvania are known to have a meaningful impact on the election numbers. While a state like Pennsylvania doesn't have as many electoral votes as a bigger state like California, "swing states" like Pennsylvania are known to have a more evenly distributed amount of support between republican and democratic parties. Where other states might "lean" more liberal or more conservative, the swing states can, and do, quite literally go either way. And until the results come in, it can be difficult to predict how things will go.

Politico named Pennsylvania a swing state for the 2016 election in part because the state hasn't voted for a republican president since 1988. They also pointed out that states like Pennsylvania would be likely to support Trump due to their primary industry — manufacturing — making them receptive to his speeches regarding trade agreements and the economy.

As of 12:45 a.m. Eastern Standard Time, Clinton had 215 electoral votes, meaning she would need 55 to win. If she wins California, who has 55 votes to give, that could certainly get her ahead. But there are also swing states still left to report in, like New Hampshire, that could propel Trump — who just needs 26 electoral votes to take the presidency — even farther ahead.