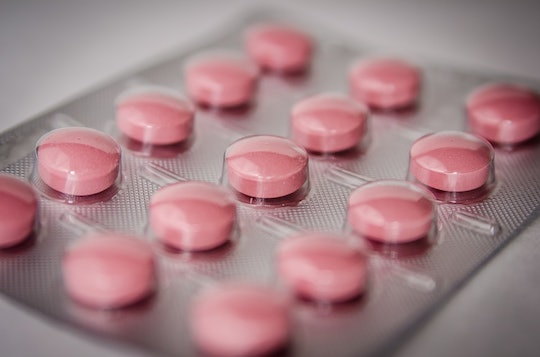 Can I Breastfeed If I Took Ibuprophen?

When a mom gets sick, there's not much she can do but pop a few decongestants and move on with her motherly duties. And when a breastfeeding mom gets sick? There's even less she can do to help herself feel better. Since almost everything you ingest passes into your breast milk, the medications you're used to taking to ease your symptoms might not be safe for you to take anymore. However, there are a few medications that doctors give the go ahead to and if you're wondering whether or not you can breastfeed if you took ibuprophen, you're about to be pleasantly surprised.

Luckily, the rules of medications while breastfeeding aren't the same as during pregnancy (which are, essentially, avoid them all). According to Parents, medication has to pass through multiple barriers before reaching your milk and the majority of it is absorbed in your bloodstream before affecting your breast milk at all. The article goes on to state that non-steroidal anti-inflammatory drugs, like ibuprophen, reach your milk in tiny amounts that experts say won't be harmful to your baby.

According to the Mayo Clinic, ibuprophen is on the list of safe, common pain relievers for breastfeeding moms, along with acetaminophen and naproxen. Although it can't be used for every sickness, ibuprophen is great for everything from a headache to a fever, and lots of other aches and pains in between. Even if it's not your preferred "drug of choice", it can still help take the edge off safely, and you won't have to worry about how it will affect your baby.

As the caretakers of everyone else, it's difficult for moms to care for themselves the way they deserve when they come down with something, but knowing that all medications aren't off the table when you're breastfeeding can help get you through.