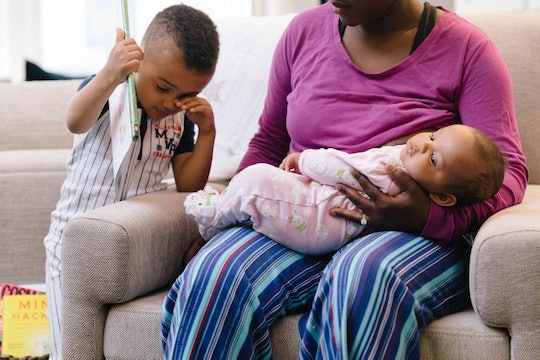 While pregnant with our last baby, I was determined to spare our toddler from having to grow up too soon. He was a late walker and a total mama's boy, so he always seemed younger than he was and very content to be the baby. I'd had friends who regretted pushing their toddlers into the "big kid" role too soon, and I vowed to give him time to adjust. This mostly meant reframing my mindset, but there were some physical factors as well. At my two-week checkup I half-guiltily asked my midwife, "Can I carry my toddler after giving birth?".

I had a hunch the answer would be no, and I was more or less correct. She told me that conventional medical advice recommends a woman lift no more than the weight of her newborn baby plus his carseat for the first six weeks postpartum. In my case, this was about 15 pounds. My toddler weighed 25.

But within the women's health community, there appears to be at least some discrepancy on the rigidity of this rule. For example, I reached out to two different experts, and was surprised to receive answers with a little more wiggle room both times.

Birth doula Darby Morris says labor affects all women differently, so it's hard to give a hard and fast rule, though erring on the conservative side is preferable. She adds that women who have delivered via Cesarean need to follow the no-lifting guideline more strictly, ideally refraining from picking up their toddlers for at least one month, as recovering from a C-section is more precarious than recovering from a vaginal birth. Even still, Morris encourages all women to let their partners do the lifting for as long as possible.

According to Sara Chana Silverstein, it may be a matter of technique. The lactation consultant and author of Moodtopia tells Romper that she doesn't necessarily tell new mothers they are prohibited from lifting their other children, but she does offer recommendations for how to do it in the healthiest and safest way possible. Silverstein says that if a recovering woman needs to occasionally pick up her toddler it's permissible to do so, but she should be careful to lift her pelvic floor while doing the movement. Bearing down, she says, can stall the postpartum healing process.

The female body is incredibly adept at the art of procreation, and yet another example of this is the way it responds when we are trying to push recovery too quickly. Weight guidelines are helpful, but the truth is our bodies will usually let us know when we're literally taking on too much too soon.

Lochia, the vaginal bleeding women experience for up to six weeks postpartum, is a normal part of childbirth recovery; however, it should always follow a gradual pattern of lightening. If you find that you are suddenly experiencing heavier bleeding again it's a good indicator that you're doing too much, according to the Mayo Clinic. In this case, stop lifting anything heavier than your newborn baby and go back to resting in bed as much as possible.

I can't say that I completely refrained from lifting my toddler for six whole weeks, but I did try my best to keep it to the bare minimum. There were days when my lochia would become heavier and I had to remind myself to back off and take it easy. When you give birth with a child (or more) already at home, recovery simply looks differently than it did the first time around. Motherhood never stops, and your toddler still needs more TLC than ever; maybe just give it to him while sitting down.