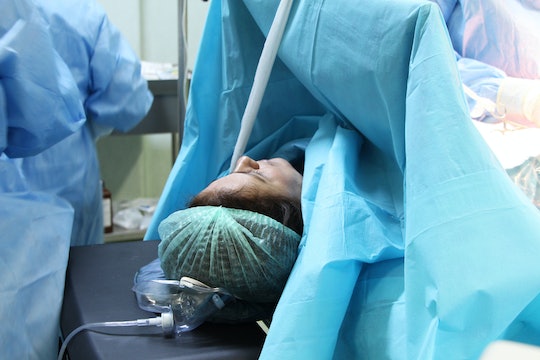 What Experts Want Pregnant Women To Know About Elective C-Sections

Childbirth can be a lot of things to a lot of people, but it's famously known to be an uncontrollable experience. You don't know when those contractions are going to kick in, how long labor will last, and if you'll end up delivering vaginally or if you'll require surgical intervention. I'd say it's normal to be nervous in the face of so much uncertainty, so if you're asking yourself, "Can I choose to have a C-section?" know that absolutely no one can rightfully blame you. After all, it's not only your body and your choice, but it's also your damn peace of mind.

A C-section, short for caesarean section, is defined by BabyCenter as, "the delivery of a baby through a surgical incision in the mother's abdomen and uterus." BabyCenter's Medical Advisory Board says, "In some circumstances, a C-section is scheduled in advance. In others, the surgery is needed due to an unforeseen complication." According to the Center for Disease Control and Prevention (CDC), 32 percent of all births are C-sections and "the overall C-section delivery rate in the United States increased 6 percent from 1996 to 2009."

The International Federation of Gynecology and Obstetrics (FIGO) have produced a set of guidelines, stating "because there's no hard evidence of benefit to the patient, performing a C-section for non-medical reasons is not ethically justified" in a response to the increase in C-sections which, according to the CDC, is part of a "considerable effort in recent years to reduce the occurrent of non-medically indicated cesarean delivery and induction of labor, with particular attention focused on deliveries under 39 completed weeks of gestation." Other efforts in decreasing the rate of C-sections include "initiatives to improve the quality of perinatal care, changes in hospital policies to disallow elective delivery before 39 weeks, and public education campaigns."

Some people expecting a baby may consider a planned C-section under the mistaken notion that C-sections provide more control and reliability than a vaginal birth. After all, some parents want the freedom to decide their baby's birthday, are afraid of tearing, or want to avoid the pain of childbirth. While the practice of planned, non-medically necessary C-section does happen, and can happen if the pregnant woman decides she wants a C-section and her OB-GYN agrees, most experts advise against it.

What to Expect states, "ACOG released more guidelines in 2017 recommending that various labor intervention methods be delayed or avoided completely if possible in women with low-risk pregnancies where Mom and baby are progressing normally."

The American College of Obstetricians and Gynecologists (ACOG) says, "Given the balance of risks and benefits, the Committee on Obstetric Practice believes that in the absence of maternal or fetal indications for cesarean delivery, a plan for vaginal delivery is safe and appropriate and should be recommended to patients." Translation? If you don't need a C-section for medical reasons, it's actually safer not to plan one.

What to Expect outlines some possible reasons a pregnant person may need a C-section, including:

While C-sections are generally safe, Healthline does remind expecting parents that they have more risks than delivering a baby vaginally. Still, it is possible to schedule a C-section in advance and for personal, and not medical, reasons, which is called an elective C-section. It is also worth noting that, according to Healthline, some health insurance plans will not cover elective cesarean deliveries.

So while it is possible to choose to have a C-section for non-medical reasons, pregnancy, childbirth, and postpartum experts all advise against it. In the end, it's vital you speak to your OB-GYN about your options, weigh the pros and cons, and make the best decision for yourself and your future baby.