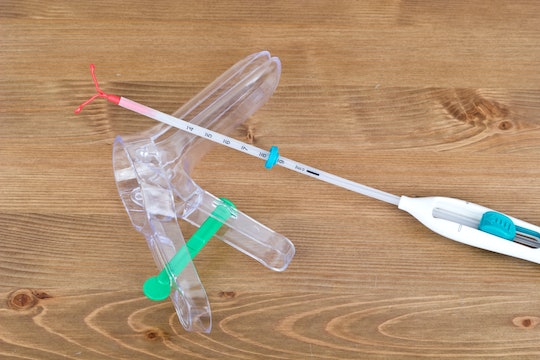 Can You Get An IUD With A Tilted Uterus?

It's 11 p.m. Do you know where your uterus is? While most uteri tip forwards towards the bladder, a tilted (or, in doctor speak, retroverted) uterus tips towards the tailbone instead. If you're wondering, can I get an IUD with a tilted uterus, absolutely — your doctors are prepared. In an interview with Romper, Dr. Yen Tran of MemorialCare Medical Group writes that, "Most gynecologists have at least four years of residency training after medical school to learn how to examine the direction and location of the uterus. We trained to know how to deal with different types of uterus: anteverted (tilted to the front); retroverted (tilted to the back); and neutral positions."

More Like This
Um, "Rusty Pipe Syndrome" Is A Thing, & Every Breastfeeding Mom Should Know About It
Are You Breastfeeding & Also *Starving* At Night?
How To Tell If Your Baby's Behavior Is A Sign Of Stimming
Can Ovulation Cause Depression? Experts Explain

Because roughly a quarter of all women have a tipped uterus, according to the American Pregnancy Association, you might, too. It's usually nothing to lose sleep over. In fact, you might not even know you have one. Painful menstrual cramps might be a clue, but only a bimanual exam can tell for sure. To complicate matters further, the uterus can tilt during pregnancy or with age, the American Pregnancy Association also noted. This means that, like your keys, your uterus might not always be right where you thought you left it. For doctors and researchers, however, a tilted uterus is a normal anatomical variant.

So what about getting that IUD?

Dr. Gerardo Bustillo of Orange Coast Memorial Medical Center writes in an email to Romper that "physicians who are experienced with IUD insertion will generally feel comfortable inserting them in uteri that are in any orientation — a tilted uterus does not change the efficacy of the IUD as a birth control method." He notes that all brands of intrauterine device, whether hormonal or copper, work equally well.

That's good news, because according to the Centers for Disease Control and Prevention (CDC), the IUD is the most effective form of reversible contraception. In fact, less than one in 100 women will conceive while using it. Maybe that's because, unlike with the Pill, you don't have to set an alarm on your phone just to remember to take it at the same time every day (just some personal speculation here).

Part of the reason that having a tilted uterus shouldn't affect an IUD is due to the method of insertion. Bustillo outlines the procedure:

During insertion, the provider first gently "sounds" (probes) the uterus with an instrument, so that the depth and angulation of the uterine cavity can be determined. This is very important prior to inserting any IUD. The cervix is then pulled toward the vaginal opening, which helps to correct any angulation and thereby make insertion easier.

An intrauterine device is certainly effective, but many women on internet forums wonder if IUD insertion is more painful for women with a tilted uterus.

Tran maintains that proper insertion shouldn't cause any extra pain (though she does recommend that all patients take 600 to 800 milligrams of Motrin before the procedure, no matter what her uterus is up to). She suggests bringing someone along to hold your hand if you're at all nervous about the procedure.

Though the many doctors Romper reached out to were all perfectly comfortable inserting the IUD into a retroverted uterus, the makers of Mirena, Kyleena, and Skyla offered some warnings about IUD insertion when asked for comments. According to the company's principal investigators, the risk of uterine perforation — a rare but serious complication — might "be increased when the uterus is fixed retroverted or not completely involuted during the postpartum period." For this reason, they recommend that doctors "delay insertion a minimum of six weeks . . . following a delivery or second trimester abortion." In addition, the company noted that the risk of uterine perforation may be more common among lactating women.

If you're concerned about getting an IUD (or just wondering where your uterus likes to hang out these days), consult your doctor for more information. In general, you should be fine to get one, but it's always best to ask your healthcare provider about your body specifically.