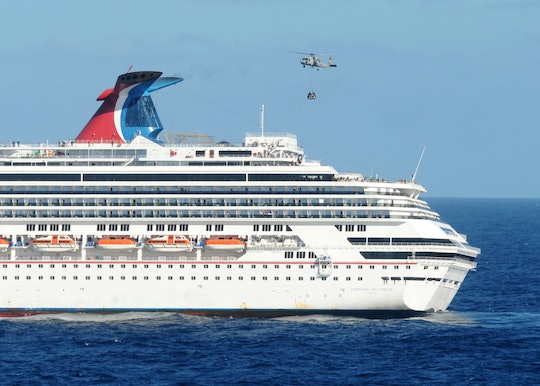 You May Be Cleared To Fly While Pregnant, But Can You Go On That Chill Cruise? Probs Not

A cruise sounds like every pregnant woman's dream come true: A deck full of lounge chairs inviting you to lay back and doze off, a sparkling pool where you can float to relieve your achy muscles, and an endless smorgasbord of food options with absolutely zero meal prep on your end. And, if you've got kids, the childcare is taken care of, so you can have some time to yourself. Who wouldn't want to indulge in a cruise while pregnant?

But, unfortunately, this is one of those fantasies you may not be able to fulfill. Emily Jackson, a vlogger and person who is currently pregnant, recently learned this the hard way. She and nine members of her family had flown from St. Louis to Miami and were all set for their dream Disney cruise, reported Cafe Mom, But after going through security and boarding the ship, Jackson was notified by staff members that she would have to disembark: Anyone more than 23 weeks pregnant is not allowed, and she was 25 weeks. It didn't matter if she had a doctor's note; the cruise line does not make any exceptions.

So what are your options if you're prego and longing for a little luxury on the high seas? Unfortunately, if you're in, or close to, your third trimester, you're probably not going to have many options, warned Cruise Compete. Most cruise lines do not allow anyone who is past 24 weeks pregnant, in accordance with guidelines from the American College of Emergency Physicians.

Cruise lines do have good reasons for disallowing people who are relatively far along in their pregnancy. When you think about it, going on a cruise is a really different type of trip than, say, flying. If something were to happen while you were in the air, you wouldn't be far from either your destination or, if necessary, an emergency landing. Not so on a cruise ship, where you're pretty much stuck. If a pregnancy complication were to arise, or if you went into labor prematurely, they would not be equipped to handle it, as explained by Cruise Critic. And who knows how far you might be from the next port where you could get proper medical attention.

Even if you're considering booking for an earlier point in your pregnancy, Royal Caribbean's own policy cautions you to weigh all the risks: "The Guest and treating physician should consider before any cruise that there is no Obstetrician/Gynecologist available on the ship, and that pregnancies, when unstable and poorly controlled, are potentially life-threatening, especially without back up."

If you decide to go ahead, Cruise Critic recommended that you arrive prepared. As we've all learned from recent horror stories, disease spreads quickly on cruise ships, and some diseases (like the infamous norovirus) put more strain on someone who is pregnant than on someone who isn't. (Not to mention that your immune system is lowered during pregnancy, so you'll be more likely to catch whatever's floating around.) So, advised Cruise Critic, pack the hand sanitizer and make frequent use of antibacterial wipes wherever you see them.

More Like This
How To Fly Safely During Pregnancy
Is It Safe To Pump While Pregnant? Experts Weigh In
22 Valentine's Day Pregnancy Announcement Ideas Sweeter Than Candy
Fun, Sexy Maternity Lingerie, For When The Mood Strikes
What Parents Are Talking About — Delivered Straight To Your Inbox