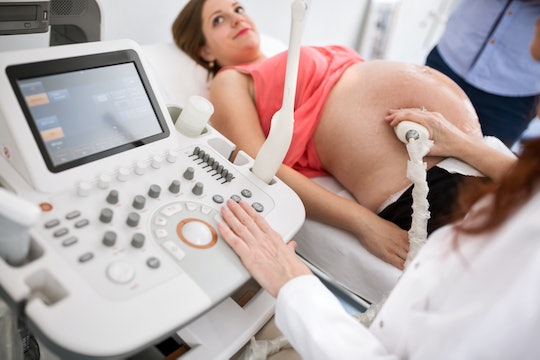 One of the perks of those frequent treks to the OB-GYN's office throughout 40 weeks (more or less) of pregnancy, is the photo album's worth of pictures you get from your hard-won ultrasounds. But an ultrasound isn't always "fun" for the woman involved, especially if she has any medical conditions that could make a "sneak peek" more painful than pleasant. So, can you have an ultrasound with a tipped uterus? Turns out, there are a few things every woman needs to know — whether she's pregnant or not — before making an appointment to see that capable ultrasound technician.

According to the Mayo Clinic's website, a tipped uterus (also called a tilted uterus, among a few other more medical-sounding terms) is a "normal anatomical variation." In layperson speak, that means that this occurs naturally in some women, and isn't something to necessarily freak out about. The Mayo Clinic explains that in most women, the uterus tips forward at the cervix and towards the navel. But according to the U.S. National Library of Medicine, about 1 in 5 women has a uterus that leans backward (or tilts) at the cervix and towards the spine. Luckily, a tipped uterus has no impact on the health of your baby, or your ability to conceive, according to What To Expect.

Most women don't know they have a tipped uterus until after becoming pregnant, as What To Expect notes. But you might notice some symptoms of a tipped uterus during your first trimester of pregnancy. Some of these symptoms include back pain, or difficulty emptying your bladder. According to the American Pregnancy Association (APA), a routine pelvic exam performed by your doctor is a definitive way to determine if you have a tipped uterus.

As for whether you can have an ultrasound with a tipped uterus, the answer is yes. Your doctor may have trouble finding your baby with a transabdominal ultrasound (the one where they wave a wand over your belly) during that first trimester if you have a tipped uterus, though. According to the American Congress Of Obstetricians and Gynecologists (ACOG), a first trimester ultrasound is not standard practice. First trimester ultrasounds, ACOG reports, are usually performed to estimate gestational age, help screen for genetic disorders, count the number of fetuses, check the fetus' heart rate, and check for ectopic pregnancy. Most ultrasounds, according to ACOG, are usually performed between the 12 to 18 week mark.

By the time you reach your second trimester (around 12 or 13 weeks), the tipped uterus problem (if there was one to begin with) actually resolves itself. As What To Expect explains, at this point in your pregnancy your uterus "pops out of your pelvis and into your abdomen" in order to accommodate your growing baby. When your uterus makes this shift (or "pop"), it nearly always rights itself upwards in the process.

Having a tipped uterus will not stop your doctor from waving their magic wand over your jelly-smothered belly. (You just might not be able to have a super readable transabdominal ultrasound in the first trimester.) Isn't the human body a magical thing?

More Like This
OB-GYNs Explain The Connection Between Stress & Miscarriage
What Foods Fight Nausea During Pregnancy?
Diastasis Recti Exercises You Can Do At Home To Heal Your Abdomen
Is Raspberry Leaf Tea Safe To Drink During Pregnancy?
What Parents Are Talking About — Delivered Straight To Your Inbox