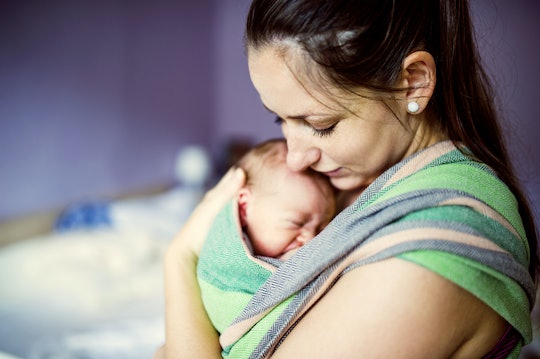 Here's The Deal On Holding Your Baby To Sleep

Getting a baby to sleep is always an unpredictable experience. Whether your little one has been a great sleeper from the start or you've had a few bumps in your bedtime road, you've probably wondered about whether or not establishing good sleep habits is really all that important. If you're being honest, chances are you've held your baby until they've fallen asleep when you felt you had no other option. But as your baby gets older, you might be asking "can I hold my baby to sleep without suffering the consequences later on?" Or, in other words, will you establish poor sleep habits if you consistently hold your baby until they fall asleep?

The parenting community is fairly divided on the idea of holding your baby to sleep. Some baby sleep experts stress the importance of starting your baby off with "healthy sleep associations." Then there are others, like those at La Leche League International (LLLI), who believe that keeping your baby close to you establishes strong connections with your baby. Other people recommend a healthy mixture of the two.

According to Parents, although holding your baby until they fall sleep should never make you feel like you're spoiling them (there's no such thing as too much affection, after all,) you should be aware that holding them to sleep may make it more difficult for them to fall asleep on their own later in life. This warning doesn't just hold true for babies who sleep in their own crib either. The same Parents article noted that holding your baby to sleep can make it hard for babies of any age (except very young newborns) to fall asleep on their own whether the family co-sleeps, bed-shares, or sleeps in separate rooms.

Like most aspects of parenting, what works for one family won't work for another, so don't stress if your methods look differently than another family's. In reality, it's not the end of the world if you hold your baby to sleep for the first month of their life or the first year of their life . And if you start them off on a separate surface from day one, that's OK too.

More Like This
Even If Your Baby Sleeps Better in Your Bed, It’s Still Not Recommended
What To Do If Your Toddler Keeps Taking Off Their Diaper At Night
When Does A Baby Recognize Their Father? A Pediatrician Explains
Cradle Cap Is Normal & So Is Your Desire To Get Rid Of It. Here’s How
What Parents Are Talking About — Delivered Straight To Your Inbox