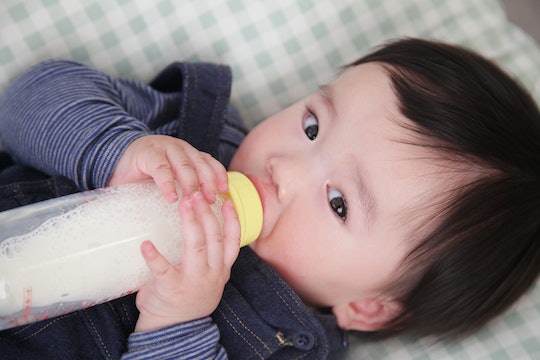 Here's How To Safely Make Formula With Tap Water

I remember strolling the water aisle at the grocery store, when my daughter was very young, and spotting something called "Baby Water." What the heck? In addition to sterilizing bottles and buying expensive formula, now I need to use special, so-called baby water as well? Sheesh. It was in that aisle that I first asked myself, "Can I make formula with tap water, or do I need this silly "baby water" instead? Turns out I could have used tap water, but not without following a few key precautions. In the end, and to my dismay, that damn "baby water" might have been the easier way to go. but baby water probably was the easier choice.

According to The Mayo Clinic, "You can use any type of clean water — tap or bottled — to prepare liquid-concentrate or powdered formula." The Mayo Clinic's website goes on to explain, however, that there are certain types of water that might require a little more preparation before you mix it with your baby's (probably expensive, although that's an entirely different article for an entirely different time) formula. If you have well water and are concerned that it might have impurities, for example, you should ask your pediatrician or your water department if you should have it tested prior to allowing your baby to digest it.

Municipal water is another ballgame entirely, too. The Mayo Clinic explains that in order to kill impurities in municipal water, you should boil it for one minute and then let it cool to room temperature prior to mixing it with formula. See why buying gallons of baby water at the grocery store seemed like an easier option? The idea of boiling gallons of water, then waiting until it cools to room temperature prior to serving, can be one too many steps when you have a newborn needing constant bottles (especially in the middle of the night).

The other benefit to that store bought "baby water" is that it contains less fluoride than your local, municipal water might. According to Live Science, too much fluoride can make your baby's teeth discolored, and many sources of municipal water can have too much fluoride added to it. If you're concerned about levels of fluoride in your city water, you need to call the water department to check the levels. If they're too high, you can use all store bought distilled water, or alternate between distilled water and either tap water or filtered tap water.

While we're at it, how often do you need to sterilize your baby's bottles, now that you've sterilized their water, too? Parents suggests caregivers of formula-fed babies (and, let's face it, breasted babies who are being supplemented with formula) sterilize bottles, pacifiers and sippy cups before the first use, and then every once in a while thereafter. You can boil the bottle or cup in water for five minutes, according to Parents, and then let them dry on a clean surface. You could buy a special sterilizer for your baby's bottles, but it's not really necessary. Instead, you can boil the bottles occasionally or after your baby is sick to get rid of any bacteria lurking.

In the end, if you have any concerns about the quality of your tap water, you should call your local water department or, like me, just lean in and buy that damn "baby water."

More Like This
Is It Good For Babies To Be Exposed To Germs? It’s Complicated
Real Parents Share What Time They Let Their Kids Rip Into Gifts On Christmas Morning
Here’s What To Do If Your Baby’s Nose Bleeds After Suctioning
What Exactly Is The Ferber Method? The Sleep Training Approach, Explained