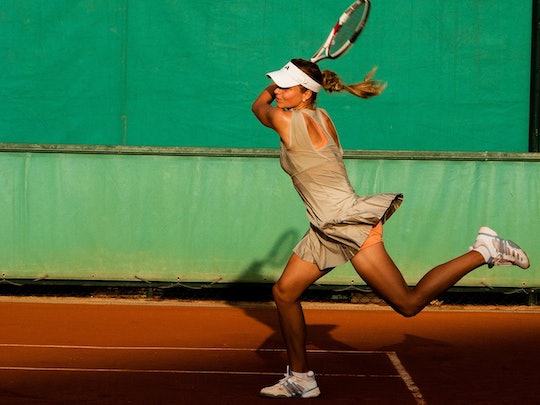 Actually, Tennis Is Safe During Pregnancy

The world is over the moon with excitement over Serena Williams' recent pregnancy announcement. Tennis fans quickly did the math and realized that when Williams won the prestigious Australian Open back in March, she would have been 11 weeks pregnant. Though undeniably impressive, the feat has many women asking, "can I play tennis while I'm pregnant?"

Most women shy away from taking unnecessary health risks during pregnancy, so it might be tempting to limit physical exertion to the bare minimum. Yet you also know that staying physically fit is vitally important for a healthy pregnancy and, ultimately, delivery. With that in mind, which is it? Is playing tennis too demanding on a pregnant woman's body?

Romper reached out to Dr. Seth Plancher, OB-GYN, of Garden City, New York, for medical advice. According to Plancher, there is no need for gestating women to hang up their rackets, because "it is absolutely 100 percent safe to play tennis in pregnancy." Plancher tells Romper that his recommendation is balanced with basic common sense: pregnant women must be sure to hydrate appropriately and be prepared to rest more often than usual. As long as those precautions are taken, Plancher encourages his patients to continue their tennis game.

The American Pregnancy Association noted that there are countless benefits of continuing moderate exercise during pregnancy, including improved sleep, reduced back aches and constipation, and a possible lowered risk of gestational diabetes. The APA also advised that when it comes to exercise during pregnancy, a good rule of thumb is that it's safe to continue sports you were involved in prior to conception, but due to the risk of a fall or collision, it's probably not the right time to undertake a brand new, physically demanding hobby that your body isn't used to.

Congratulations to Serena Williams and fiancé Alexis Ohanian on their big news, and kudos to Williams for not giving up her passion in the meantime. If you're a healthy, seasoned tennis player like Serena (okay, maybe not just like Serena), feel free to hit the courts too, with water and rest breaks. When it comes time for the marathon of labor and delivery, your body will thank you.

More Like This
How To Fly Safely During Pregnancy
Is It Safe To Pump While Pregnant? Experts Weigh In
Dealing With Postpartum Back Pain? Physical Therapists Share Their Tips
Here's What Pregnant People Actually Want For Valentine's Day
What Parents Are Talking About — Delivered Straight To Your Inbox