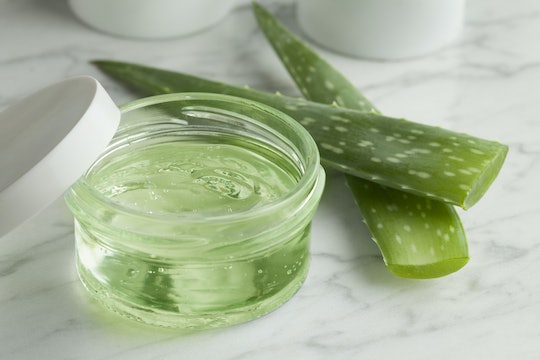 I am a huge fan of aloe vera. I have several of the plants in my house, and I love using them for everything from my hair and my skin to buffing my furniture. I remember growing up, my mother would crack open one of the long gooey leaves, and dab the moist tip on my skin whenever it was irritated or burned. Since it's such a big part of my life, it's no wonder that it would be the first thing I turn to for my child. But can I put aloe vera on my baby, or is it safer to go with a more conventional medicine or lotion?

Aloe vera in its raw, unprepared form is considered generally safe when applied topically, according to Kids First Pediatrics. However, they caution strongly against giving it to your baby orally or as a supplement. As for using aloe topically, you don't even need a plant. There are dozens and dozens of baby gels, lotions, oils, and powders that are just full of the aloe vera goodness that is so healing. According to the World Health Organization (WHO), the fresh preparation should be collected by using clean leaves that are peeled back to reveal a "filet" of gel that can then be applied topically.

The uses for aloe vera are multifold. According to the WHO, the plant is commonly used in the treatment of burns, inflamed skin, over rashes, and as a general moisturizer. Often called the "burn plant," aloe vera is particularly effective in the treatment of mild sunburns on your baby, noted the New Kids Center. Dr. Daniel Mackey, a pediatrician at Children's Hospital of Orange County, also noted that "aloe vera gel, or a product containing aloe vera, can help with the skin healing," even in the littlest of the littles.

In my family, we have what we refer to as "cheap skin." It's pale, super sensitive, and doesn't play well with others. Needless to say, diaper rash is something all the parents in my family are very familiar with. We use a diaper rash spray before the heavier creams when it gets really bad. The spray we use contains Aloe and witch hazel, and it instantly cooled the skin and decreased redness for my baby's bums.

This is all well and good, but I wanted to talk to an expert to find out more about putting aloe vera on a baby.

I spoke with pediatric home care nurse Elizabeth Cole, of New York, and she tells Romper, "As long as they're not allergic to it, it should be fine, but the plant might have a lot of pesticides or dirt on it, so make sure it's really clean." Cole says this problem is easy to forego if you just buy an aloe vera gel that's specifically designed for babies. "When I was growing up in Jamaica, we used it for cradle cap and diaper rash," she says, noting that it worked pretty well. Because the aloe she used was wild, Cole says that they'd clean the leaves with vinegar and water before stripping them to get to the gel inside.

But don't fret if you don't have an aloe plant. "It's so easy to go to Target and buy it already made up," Cole says. "You don't need to clean anything but your baby, and it's a lot less messy." She adds that aloe plants also go bad quickly once they've been cut, so having a prepared gel is nice because you don't need to worry about that.

If you're worried, by all means, talk to your provider about which remedies you choose to use on your little one. Thankfully, though, aloe is pretty universally accepted.