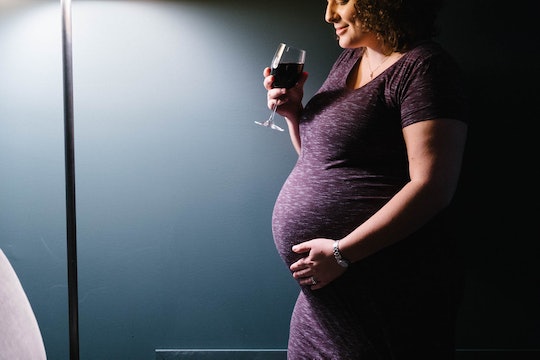 Pregnant moms know how to sacrifice. An journey of constant adjustment begins the moment that pee stick turns positive. You give up the comfort of feeling at home in your own body, certain favorite foods, and, if you imbibe, your favorite alcoholic nightcap. While all those adjustments are temporary, they can also feel overwhelming. So if you've asked yourself, "Can I really have one glass of wine when I'm pregnant?" know that you're not some "bad mom" or "horrible person" for asking. Plus, there's a lot of conflicting information out there, so asking what's "allowed" and what isn't is just necessary at this point.

Scouring the web, you'll likely find a slew of opinions, each more contradictory than the last. There are moms who openly admit to drinking while pregnant, others who say they'll have a glass or two, sparingly and in private, and plenty of moms who refuse even a sip of alcohol during the entire 40 (more or less) weeks of pregnancy. The confusion might be the result of a 2013 study via BMJ Open, which claimed moderate drinking during pregnancy wasn't harmful and, in fact, could help a fetus' brain develop.

Another study in Alcohol and Alcoholism stated a single glass of wine per week might contribute to better mental health in kids. It's best to refrain from pouring that glass of red just yet, though.

The American Pregnancy Association (APA), however, advises a zero-tolerance policy when it comes to alcohol and pregnancy. The APA adds that prenatal exposure to alcohol is the "leading cause of birth defects and intellectual and neurodevelopmental disabilities in children." A report published in Pediatrics urges pregnant women to refrain from any alcohol, even one glass of wine, saying it's unsafe during any trimester.

Dr. Michael Charness M.D., a neurologist and the scientific director of the National Institute on Alcohol Abuse and Alcoholism (NIAAA)'s Collaborative Initiative on Fetal Alcohol Spectrum Disorders, agrees with the APA, citing that while there's plenty of evidence showing the potential consequences of drinking while pregnant — such as Fetal Alcohol Spectrum Disorders — not enough data exists to prove drinking during pregnancy won't cause harm.

The Center for Disease Control and Prevention (CDC) also concurs with the aforementioned APA recommendation, saying:

"There is no known safe amount of alcohol use during pregnancy or while trying to get pregnant. There is also no safe time during pregnancy to drink. All types of alcohol are equally harmful, including all wines and beer. When a pregnant woman drinks alcohol, so does her baby."

When it comes to drinking one glass of wine, the APA and CDC are clear: it's not safe. The contradictory recommendations can still be confusing, though, so when in doubt it's best to speak with your OB-GYN and/or other health care professional. Just like any other decision you'll inevitably make as a new parent, the best you can do is listen to the experts, consult with doctors, weigh the pros and cons, and make the best decision for yourself and your family.